Thank you to Cristi for reminding me what day it is... 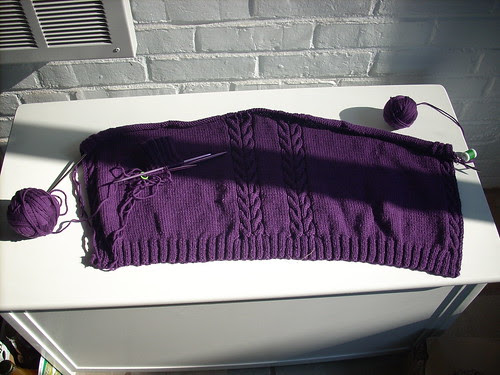 I can't say I have much on the needles right now - it has just been too damn hot for knitting. This is Willow's Mi Escuelita sweater, and I am stuck on one of the sleeves because one of my dpns fell under the sofa... and I asked Andrew to get it... and the sofa is too heavy for me to lift up...

Story Of My Life 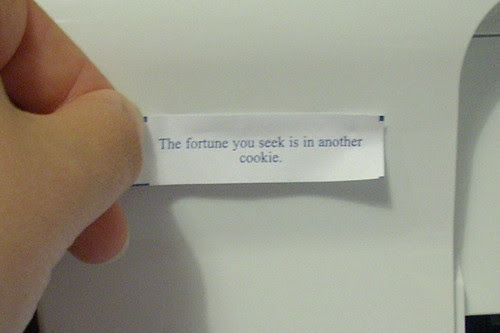 Sorry folks - not much to blog about here of late. Super busy at work, wrenched my neck so knitting and reading were off-limits for a while. I'm feeling better now, but I think 3 tornadoes hit my house while I was convalescing.
Posted by Jo at 8:12 PM No comments:

As promised, the funny beer: 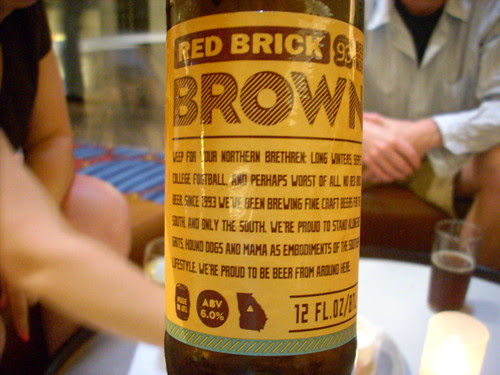 Let's see if I can transcribe this correctly -

Weep for your Northern Brethren: Long winters, suspect college football, and perhaps worst of all, no Red Brick Beer. Since 1993, we've been brewing fine craft beers for the South, and only the South. We're proud to stand along grits, hound dogs, and Mama as embodiments of the Southern lifestyle. We're proud to be the beer from around here.

And, the scientific beer: 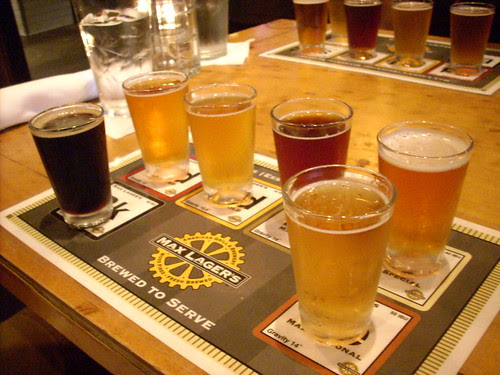 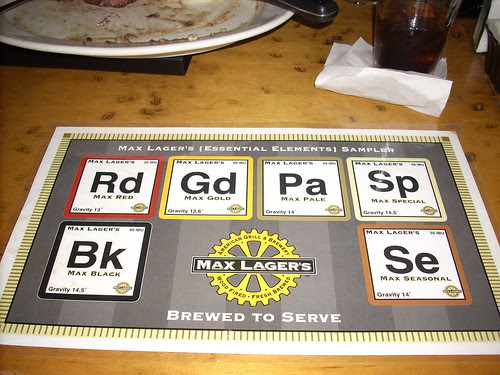 My co-worker, Colin, asked his brother to look up a good place for us to have dinner in Atlanta, and he came up with Max Lager's. It was a absolutely phenomonal choice - I had the best ribe eye steak I have had in a looooong time and some of their homemade rootbeer. I loved how their beers were organized according to a periodic table. These must have been the in-season beers - because there was a larger periodic table on the wall with many other beers listed on it.

And when we were leaving, I spied a little bit of home - 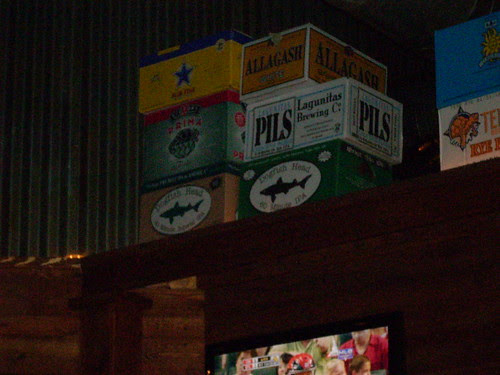 Some Dogfish Head beer stacked up above the bar!
Posted by Jo at 6:26 PM 1 comment:

(Sorry - work got the best of me. Funny how things explode when you are away for a few days.)

During the baseball game, the announcer made periodic references to a concert after the game. At first I thought that meant that everyone had to clear out of the stadium quickly after the game so they could set up for the concert - but then I noticed that some people had tickets that said, "Field Clearance." It turned out the there was a Beach Boys concert after the game, and if you had a ticket to the game you were welcome to stay for the concert. So, we stuck around in the blazing heat, willing the sun to go down enough so that we would finally be in the shade (I'm not kidding here - we kept turning around and counting the rows as the shade got closer and closer) and watched the roadies arrange the set.

Now, I have something to confess here. I have never been to a concert.

Still with me? It isn't that I never had opportunities - I've even had tickets in hand for concerts - but invariably something happened and I wasn't able to go. So, I was a little bit amused that my first concert was going to be a free Beach Boys concert.

Oh my - the amusement quickly trailed away once they started singing. Firstly, only two of the people on the stage were Beach Boys... and secondly, it was so badly lip-synched that it was painful to watch. Someone a few rows back yelled out, "Turn on the lead singer's microphone!" (only it was a bit more expletive-filled). We stayed through a few more songs, hoping it would get better - but it didn't. We headed back to the car, got lost once again (Atlanta has a serious lack of coherent street signs) and returned to the hotel for dinner.

Next: The funny beer and the scientific beer

(Oh - and PS - the concert I would drop everything to attend? Foo Fighters. Dave Grohl absolutely does it for me.)
Posted by Jo at 5:47 AM 3 comments:

I was in Atlanta, Georgia earlier this week for a conference - and because it was a work thing, I didn't get to spend much time outside. My co-workers and I flew out to Atlanta Monday morning - and once again, I have to say I love it when I my trips are contained within a single time zone! We arrived at our hotel, the Marriot Marquis, and I had to take this picture from my room on the 23rd floor: 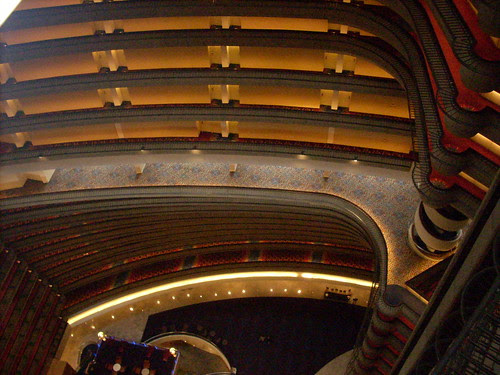 The hotel had a very Escher-like quality to it - and if you are the kind of person who has any kind of aversion to heights, I don't think this would a good hotel for you. Here is a look up from the mezzanine floor: 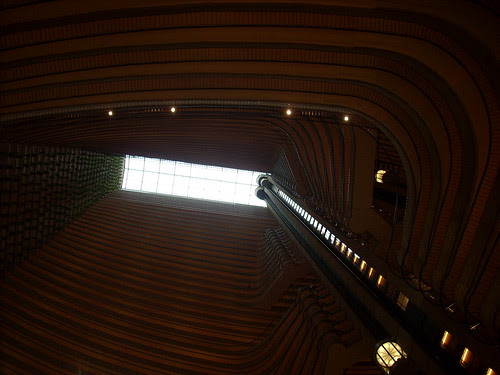 I hadn't expected to see this kind of interior space hotel in Atlanta - I have seen hotels like this in Denver, but I expected it there because of the cold weather - you would want to give the illusion of open space, even when it is too inclement to be outside.

After checking in and changing, we attempted to find the Georgia World Congress convention center... Yeah, notice the word 'attempted'... We did find it eventually, but not before rolling through some less-than-savory neighbourhoods and finding a motorcycle club. We were tempted to go back to the motorcycle club to ask for directions, but then found one entrance to the GWC. It wasn't the one we wanted (I don't know if I could even explain how huge this place is), but at least by getting in there, we were able to nose around until we found the conference area. We set up our booth, and then high-tailed it out of the GWC to head out to Turner Field (getting lost along the way, once again) to see the Phillies lose 9-3 to the Atlanta Braves. The game was not fabulous, but our seats certainly were - we were maybe 15 - 20 feet past the 3rd base and only 8 rows up from the grass (and at only $38 per ticket!! You would pay *way* more than that to sit in the same place at a home Phillies game.) We arrive in the 6th inning, but it was just as well considering how we were getting clobbered.

Coming up next: a surprise concert and funny beer -
Posted by Jo at 9:12 AM 2 comments:

Blog post last night called off due to mysterious power outage. It will be up tonight!
Posted by Jo at 5:31 AM No comments: