Piper the Conquerer of Stairs

Look at me, I'm climbing the stairs! 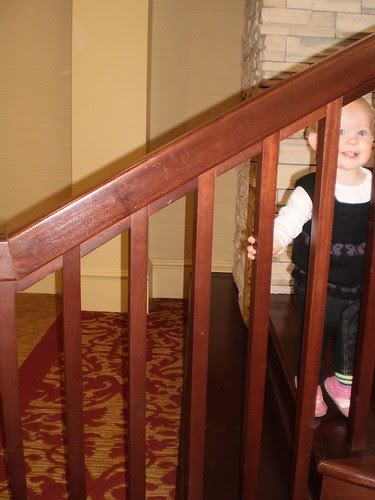 Yes, she was up there all on her own steam. 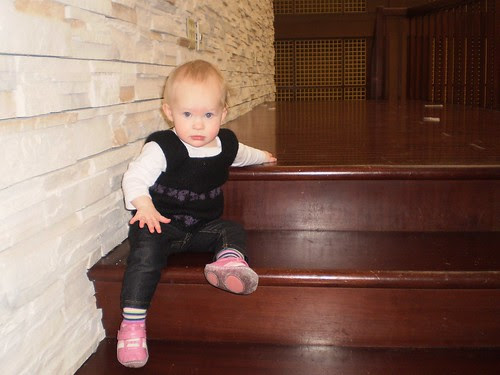 Put the camera away, Mama! I want you to chase me!

We were at the hotel where Willow’s State Geography Bee was held, and since little children weren’t welcome, Piper and I had to meander around the hotel for 2 hours. The hotel had wifi, but watching Sesame Street via Netflix on my Nookcolor only held her attention for about 10 minutes. She spent more time than that trying to figure out how to get the fire extinguisher out of its glass case! The hotel had this dais set up in the ballroom - for weddings, I suppose - but Piper got the biggest kick out of climbing (and walking by the end!) up the stairs, then sliding back down on her bum or belly and jumping into my arms from the last step. Except she didn’t always clue me into the fact that she was going to jump, so there was the odd splat! It didn’t seem to deter her any, however.

On one of my due-date boards we have a weekly or so photo contest, each with a separate theme. The current theme is 'Favourite Outfit,' but it doesn't really specify whether it is your favourite outfit on the child, or the child's favourite outfit to wear... so I chose my favourite outfit - because I knit it for her.

So, here was my first attempt at a shot. Notice her flashing her belly and giving the camera her evil scientist look: 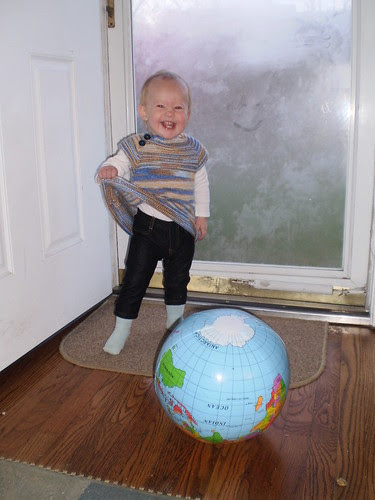 And then the second shot. "Let's just hide the exact thing Mama wants to take a picture of!" 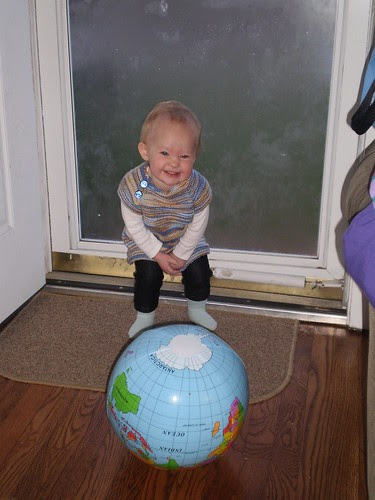 I was running out of time - we really needed to leave for school, so this was my last shot: 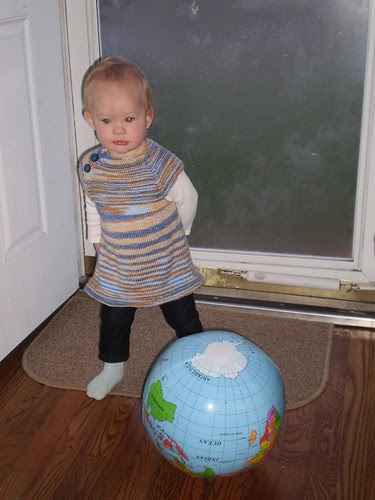 Okay, so she isn't really looking at the camera - but it is a beautiful shot of her Little Sister's dress, which now has become more of a vest for her as she has grown. Pretty soon it will be too warm to wear it and at the rate this kid is sprouting, I'm not sure it will fit come autumn - so I am going to get as much use out of it as I can! (And maybe pass it down to one of my friends who has a little girl younger than Piper... Bez? Pam? Bev?... just because I like it so much.)
Posted by Jo at 6:47 PM 7 comments:

Random B&W on a Saturday

I was playing around with the settings on our digital cameras, realizing that I know very little about the non-automatic settings. To my surprise, I found out that Willow's camera can take black and white shots... so I took some! 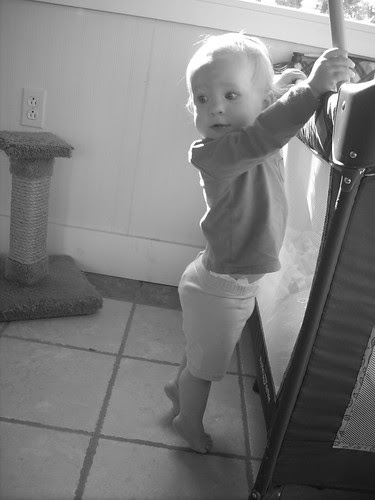 No! I will not stand still for you to take a picture! 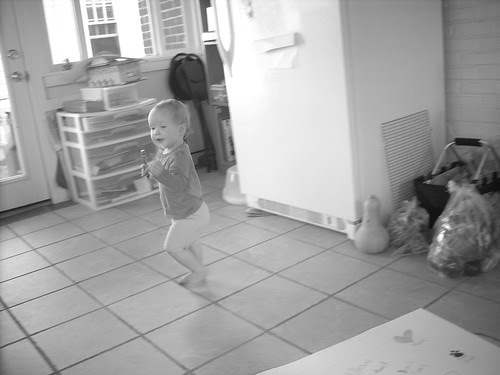 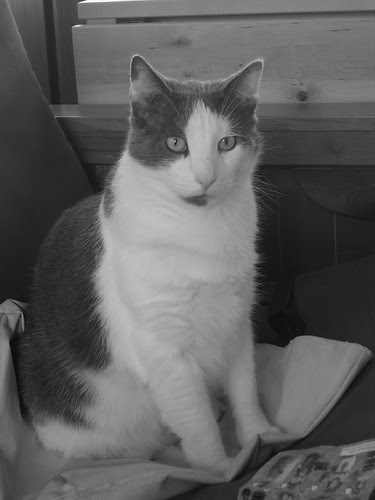 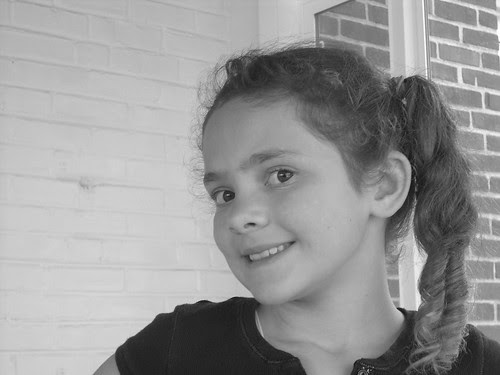 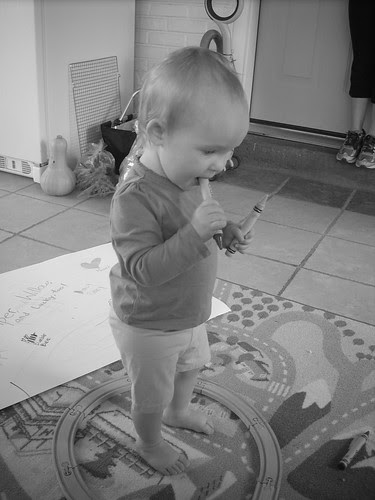 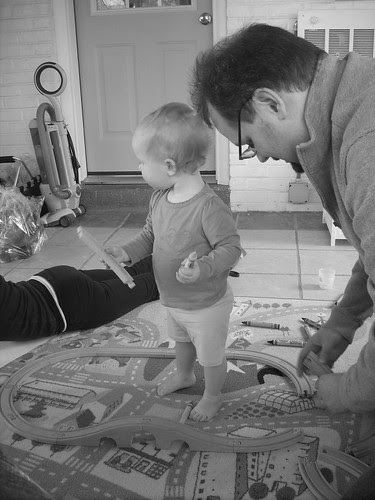 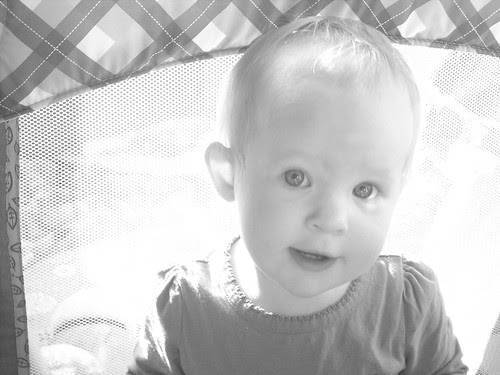 You don't need this camera, do you? 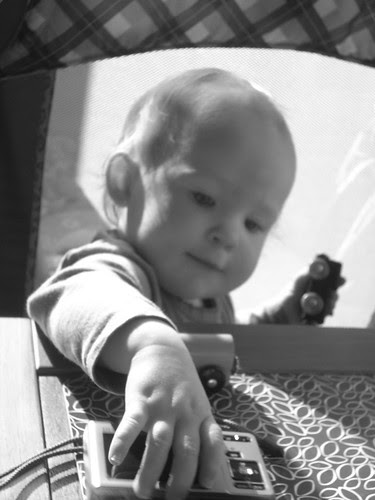 Maybe if tomorrow is sunny, I'll try the sepia setting.
Posted by Jo at 6:34 PM No comments:

We went to the Philadelphia Flower Show this morning, and I was very excited because last year we had to sit the Flower Show out because Piper was only a few weeks old at the time. This year's theme was Hawaii, so for the last few days we kept joking that we were heading to Hawaii for a day trip.

This is what you saw when you entered the convention center: 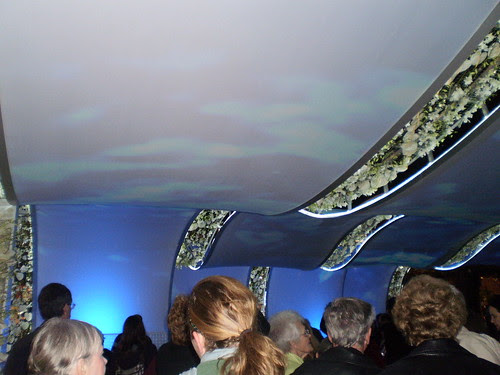 It's a little freaky, but it doesn't make sense because you aren't getting the audio that goes with it - rushing waves and surf. There were thousands of white orchids everywhere. 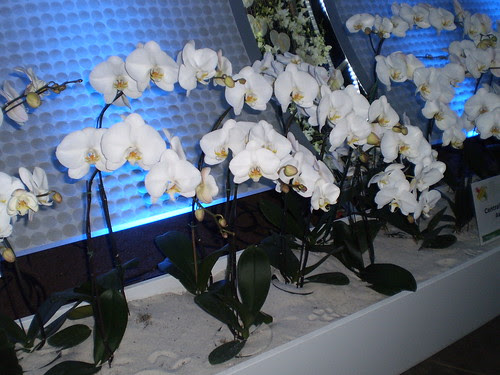 I have to say I won't really be gushing about this year's theme. It just wasn't what I was expecting. Really, as dry and gloomy as this winter has been, I was really looking forward to something bright and multi-coloured and tropical. The lighting in the convention center wasn't just dim - it was dark. Half my photos were taken on the 'night time' setting on my camera. Add to that the fact that this was the most absolutely crowded I have ever seen the Flower Show - there were so many exhibits we just couldn't get anywhere near because there were so many people.

Anywho. I did get some great shots of orchids - and that was really the most outstanding thing about this theme - so here are some of my shots: 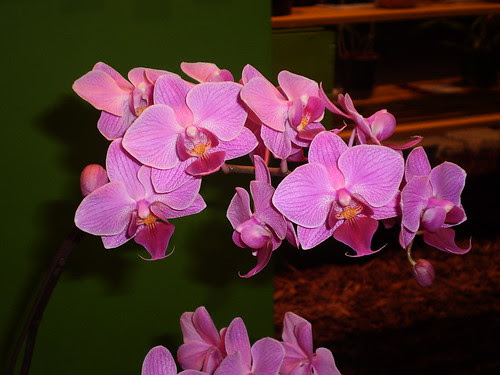 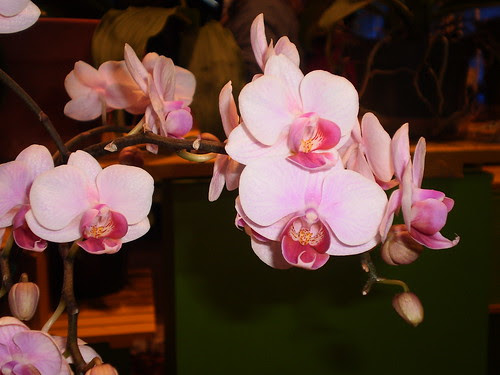 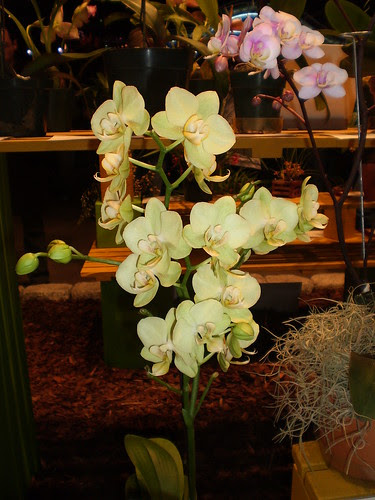 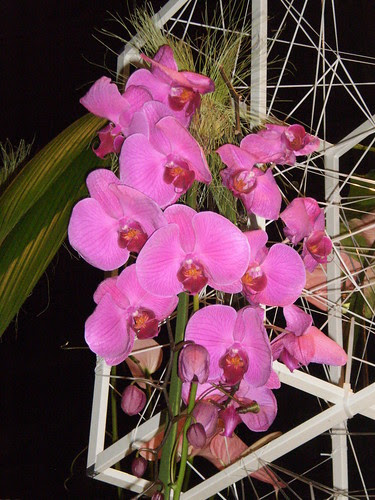 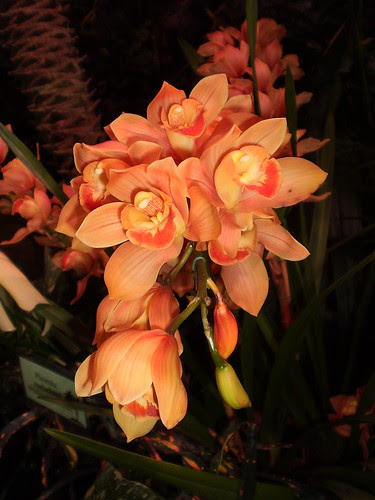 Going along with the Hawaiian theme, there were some neat floral arrangements dedicated to the volcano goddess, Pele: 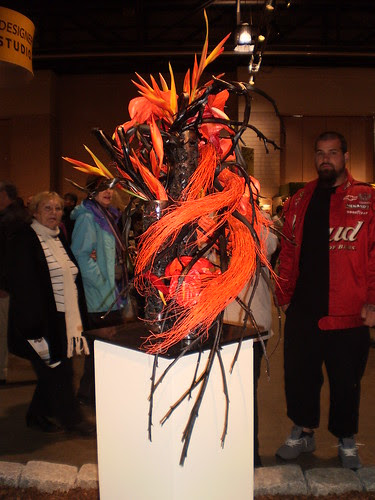 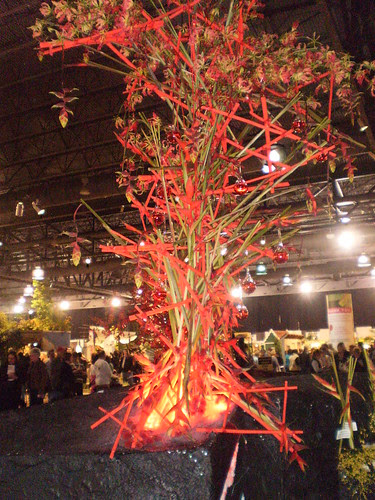 If you would like to see more of the pictures, you can go to my Flickr photo set to see the others.

I had two other gripes - first, I didn't see a single vendor selling heirloom vegetable seeds or just other interesting vegetable seeds than I would find in my local stores. Every time I have gone to the Flower Show previously I have come home with seeds for things like golden beets and black cherry tomatoes - so I was diappointed to not see a single vendor. Secondly, I know I am walking with a stroller. I, however, am walking very carefully so as to not crash or bang into other people, and have a wealth of patience for when a break opens up in the crowd so I can get through. For those twits who see an empty spot in the crowd and lunge for it, and end up tripping over Piper in her stroller, you deserve every injury you get. It happened at least 5 times. Look where the hell you are walking! One guy even accused me of following him when he tripped the second time!

Maybe next year I will take a day off work and go on the Monday or Tuesday, after the big crowds have gone through.
Posted by Jo at 9:34 PM No comments:

I participated in a Birthday Swap in February - the owls from my last post were what I made and sent to my downstream partner. Today I received my package from my upstream partner, which had an adorable little vest for Piper: 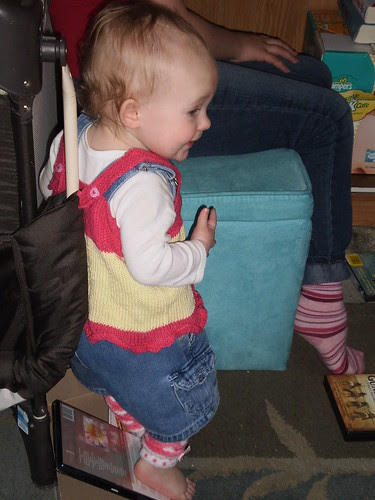 Of course, getting her to sit/stand long enough to take a picture was pretty much nigh-impossible today, but trust me, it's a cute vest. 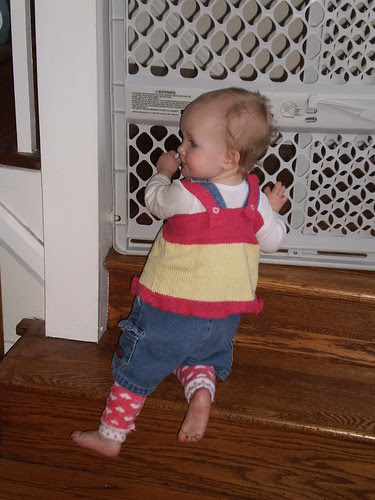 (We put up the gate at the top of the first set of steps this morning, and Piper is fascinated with it.)

There were some goodies for me in the package, too: 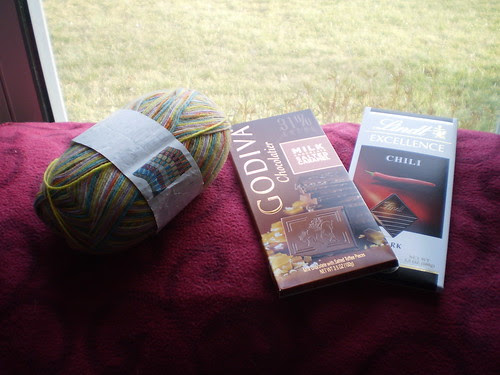 I'm intrigued by the chocolate with chili - I've never tried that before. I know the salted caramel chocolate won't last long. And Willow has already requested socks with the yarn my partner sent - my challenge now is to keep my knitting up with her rapidly growing feet! Thank you very much!
Posted by Jo at 8:25 PM 3 comments: