We were on the plane. Buckled in. Hungry, thirsty, and really needing to pee, but on the plane and ready to go. Everyone was strapped in, waiting for the plane to move when the pilot came on the PA and said there was a problem with one of the beverage carts - that it wouldn't lock into place, so we had to wait for another one to get delivered. In the meantime, everyone had to stay in their seats. About 30 minutes later, the cart was delivered and installed, and we were ready to go.

Well, we were ready, in any case.

Apparently we had lost our place in the take off line because of waiting for the beverage cart, so when we did get to the take off strip, we were behind 17 other planes (I am not kidding - they told us this over the PA). I have mentioned that I really needed to pee, right? Now, I am an adult and can control things better, but Willow started squirming in her seat and saying she had to go as well. I tried to tell her that there was nothing we could do - that we had to wait - but you can imagine how well that went over.

About thirty minutes after that we get in the air, and I'm hoping and praying for the seatbelt sign to turn off so I can make a beeline for the bathroom. It doesn't. What happens instead is that the pilot comes on the PA again and says that they are expecting turbulence, so they are leaving the seatbelt sign on indefinitely. WTF!?! The attendants come by with the beverage cart (incidentally, the only time they come by during the 5 hour flight), but since we are in row 6, the attendants have to go the entire length of the plane before we can even think about getting to the bathroom. Willow is about crying at this point, saying her tummy is hurting from having to go. There is a bathroom in first class, but the first class attendant is standing guard (I am so not kidding here), not letting anyone from coach into first class.

We have been on the plane for about and hour and half by this point, and I am starting to feel crampy - I am whipping my head around every 2 minutes to see how much further the beverage cart has moved. Once again, the pilot comes on the PA, telling people to stay in their seats because of the expected turbulence (which never did come). I couldn't take it anymore. The cart was at about the third to last row, and I got up, pulling Willow with me. We get to the cart and the attendant says, "Ma'am, you will have to sit down - the seat belt sign is on." I said, "No - I am 4 months pregnant and I am about to wet my pants." Magically, those words worked! The moved the cart out of the way, let me and Willow through, and blessed relief! Andrew said I must have caused a revolution, because after we stormed the bathroom, there was a line up when we got out.

The rest of the flight was rather uneventful - we didn't have much in the way of amusements because there were no movies (or TV screens on the plane, for that matter), and Andrew had the portable hard drive (and was a few rows back), and our plane, which we were told would have WiFi, didn't. Willow and I napped for a bit, and then woke up as we were flying over the Great Salt Lake in Utah, and then saw this: 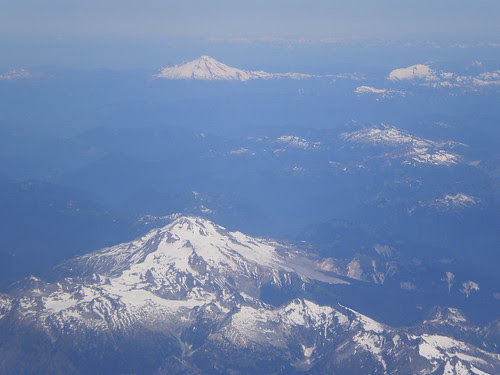 I knew we were getting close by this point - mountains mean we are getting close to the West Coast. I really miss living near the mountains. The highest point around here is the building I work in. Here's another shot: 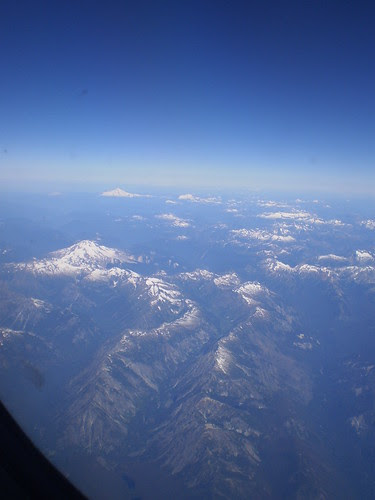 Cool, right? I love the setting on my camera where I can take pictures through glass and not have it reflect.

Coming up next: Landing in Seattle and heading over to the Island.
Posted by Jo at 6:10 AM 6 comments:

The day we left for our vacation was an exercise in anxiety I really didn't need.

Let's start with the night before... I received my email from USAirways saying I could go to their website and check in prior to arriving at the airport, so I tried to do that, only to find that our reserved seats were no longer reserved. For the first time in a few years Andrew was traveling with us, so I had reserved seats 6D, 6E, and 6F. I even had an email confirmation saying this! The tickets the website tried to give us the night before? 6E, 8F, and 9B. I tried calling the airline to straighten this out, explain that I had an 8 year old, and she needed to sit with one of us - but no go. The customer service person said the flight was full, there was nothing she could do - that my only option was to try to switch seats at the ticket counter.

Flashforward to the next morning. Things are going well- we had plenty of time to eat breakfast, finish last-minute packing, and get to the airport just before 6am for our 7:30am flight. Only to get to the ticket counter to have them tell us there was nothing they could do about the seat mishap and all I could do is ask the attendants at the gate to switch us around. I've been in that situation before and let me tell you, it isn't pretty. You would be surprised how many grown adults won't switch seats with you so you could be with your TWO YEAR OLD! That was the one and only time I've flown in business class - the attendant got so pissed off by all the responses she bumped someone from business to coach and gave Willow and me business class seats. Nice flight!

So, we get up to the security area for Concourse B, only to find that the line extended past the SEPTA (regional train) entrance. This meant that there were *hundreds* of people in line before us. An official came by and told everyone after a certain point in line to go to Concourse A's security because there was no line there and we would get through quicker (but you would still have to walk back to Concourse B afterward). So, we rush over there and find that the line up at Concourse A is LONGER than at B! We couldn't go back now, so we stuck it out, and by the time we actually put our stuff on the conveyor belt for security, our flight had started to board. Andrew and Willow ran back to Concourse B to get to the gate and let them know that pregnant me was still following.

(and maybe I should add at this point that in this hour plus of standing in line there had been no bathroom breaks or drinks to be had?)

I get to the gate, dehydrated and crampy because I have to pee so bad, and try to explain to them about the seating situation. They say that the plane is nearly boarded, and I will have to see one of the stewards on the plane about switching seats. Someone must have been smiling at us at this point, because we had a moment of easy before things got difficult again. The lady who was to be seated an the window beside Willow didn't even hesitate to move two seats back to my assigned seat so I could sit by Willow. I thanked her profusely, Willow and I sat in our seats (and Andrew to his a few rows back), and we were off.

Coming up next - a little more flight drama and errant taxi drivers. And pictures of beautiful snowy mountain tops.
Posted by Jo at 6:01 AM 2 comments: 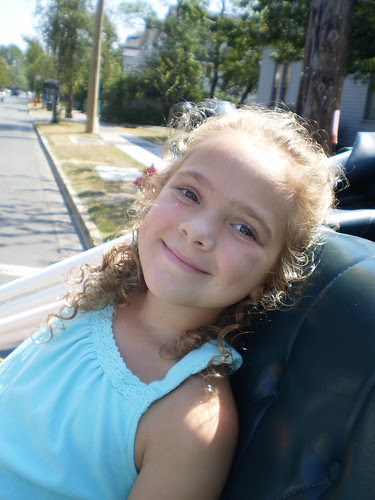 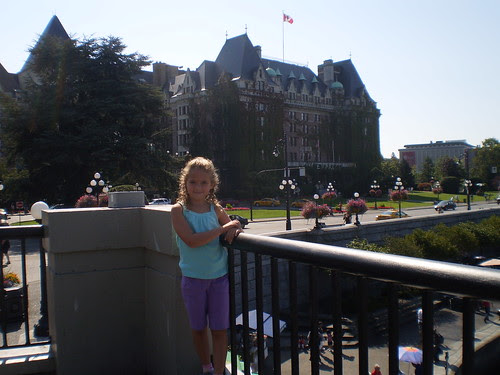 There's more to come - we arrived back from vacation on Saturday morning, and jet lag has been kicking my ass ever since. It's going to be fun at work today...
Posted by Jo at 6:33 AM 4 comments:

Once again, to prove to you that I have been knitting, here are a few of my current WIPs: I cannot even tell you how many times I got about 3 - 4 inches into the cuff, hates how the increases were working out, then ripped it all out. The sleeve is a 2x2 rib, but you are increasing once on each side of the marker every 6 rows. You are supposed to incorporate the increases into the rib, but no matter how I did it, it looked ugly. I'm very much OCD about symmetry - so in the end, I decided to increase only as knit stitches until I had six stitches on either side of the marker, and then incorporated the ribbing - it gave me the inverted arrow series of knit stitches denoted by the yellow in the picture. Not as the pattern intended, but it satisfied my need for symmetry. I hate working with dpns - so I was happy to pick up a 9" circular at Stitches With Style - the sleeve sped along after that.

And this is my Jaywalker Experiment: 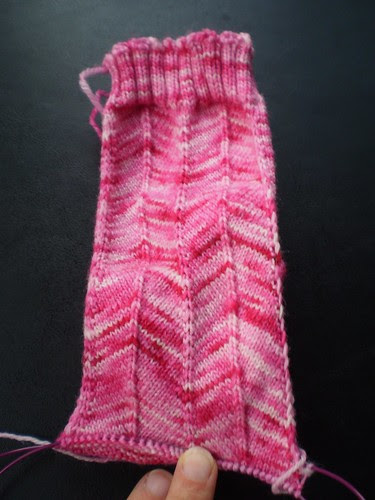 An experiment, you say? Looks like a normal Jaywalker to me... maybe I should call it a Reverse Mullet Jaywalker... party in the front - 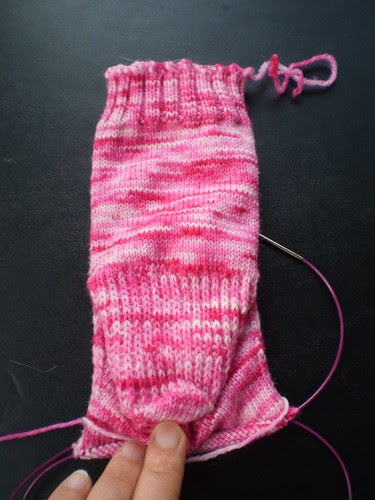 Business in the back!

This is my third attempt at Jaywalkers, and it bugs me to know end that I can't get these pretty socks over my cankles. So, I decided to do the chevron pattern in the front and just knit the back, like the foot of Jaywalkers. It's working well, and I think there is a small chance that these might actually fit me. 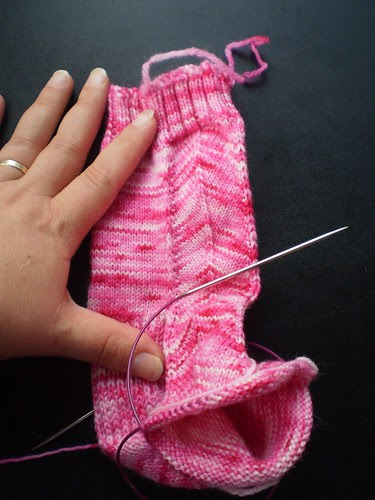 I haven't started knitting anything for the baby yet - does anyone have some cute suggestions for me?
Posted by Jo at 7:29 PM 9 comments:

...that the pregnancy brain has sunk in. I tried to go to work in my slippers last week, I'm constantly calling people back because I forgot to tell them something the first time around. I keep forgetting to buy key ingredients for dinner (which is why we are having pizza for dinner tonight rather than the chicken quesadillas I had planned... two fails on that end - no guacamole and the chicken wasn't defrosted). I'm managing to keep things together at work, but I think I need a personal assistant at home!

I've had two dreams lately that I have had two little girls - but oddly enough, at a much closer age range that Willow and #2 will be. In one dream, #2 was an exact mini-replica of Willow, pigtails and all, and in the other dream I had two girls with red hair - one curly, one straight. In both dreams, there was about 4 years between the two girls, not the 8.5 that there will be in real life. And I think it is funny that I am dreaming of another little girl, because I feel like I am having a boy - maybe it is just the familiar. Andrew and I will be finding out the baby's sex - even if for the sheer fact that I want to know whether the 8 year old baby clothes packed away in my basement are still serviceable or whether I need to get more stuff!
Posted by Jo at 6:07 PM 8 comments: