Teri is going to take a strip off me if I don't put a blogpost up, so here are some pictures of our weekend.

On Saturday morning, Willow and I headed out to Linvilla Orchards for their Apple Festival. The absolute best thing about Linvilla? Their apple cider donuts! We were meeting our friends, Asami, Gara, Ray, and Ty, at Linvilla and we arrived before them, so Willow and I settled down to munch on some cider donuts and apple cider.

I'm not sure how much of an Apple Festival this was, other than the apples are being harvested and there are lots of them - but we still had a good time. They have a wooden playground for the kids, hayrides, animals to see, and lots of u-pick fruit. I came out of their market with a large bag of Jonathan apples, white/purple/green Japanese eggplant (which we made Mabo Nasu with last night), more rhubarb for me to freeze, and white beets. I've never seen white beets before - I've seen golden ones, though. I'm the only one in this house that will eat them - more for me!

We tried taking pictures of the kids - but it was a comedy of errors trying to get a 7 year old, 4 year old, and 18 month old to all sit still and all look at the camera for the nanosecond needed. Here was the best attempt: 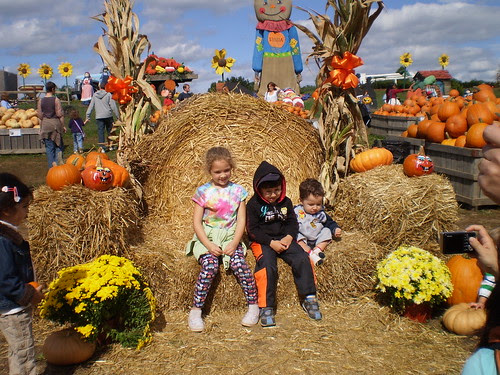 And this is two seconds later: 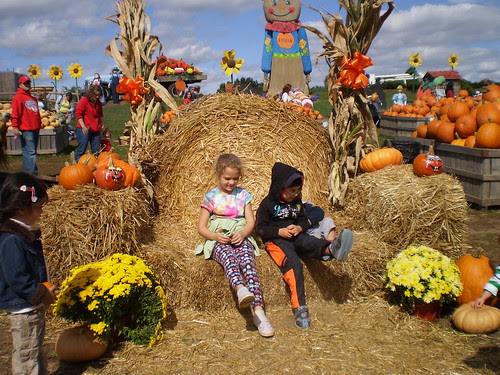 Ty on one of the wooden playsets - I think this one is the train. 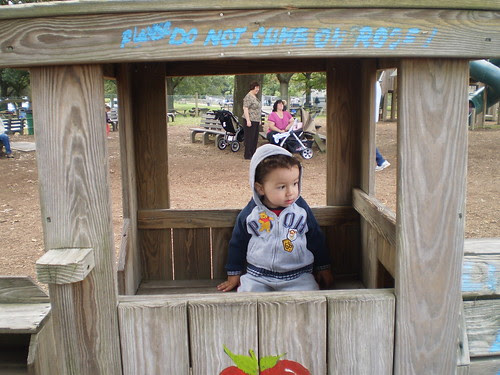 Okay - look at this picture and snicker at me. I know it is manure on the field - but I was just struck by the placement and colours. This was on our hayride through the orchards. 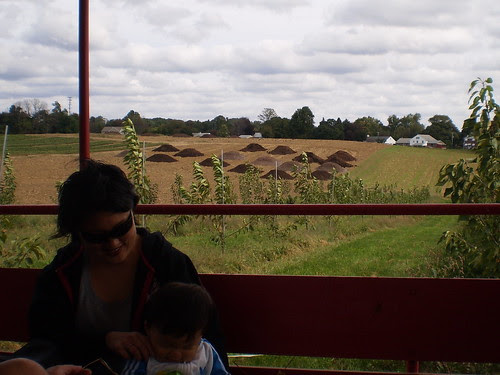 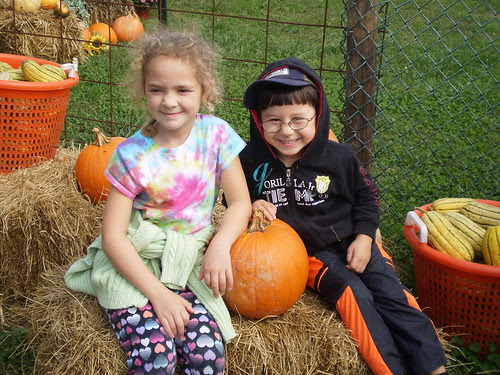 The next day Andrew, Willow, and I took a long drive out Route 30 into Lancaster County to meet our friends, Stefan, Jenny, Soren, and Sam, at Dutch Wonderland. I have to admit that I was apprehensive - it had poured with rain all night and was still coming down Sunday morning. Jenny said they had called the park and was told it was clearing up there, so we got in the car. I have been to Lancaster County before - Andrew's friend Kristin used to live in Red Lion, but it is still a nice drive. For those of you not from this area, Lancaster County is home to large Amish populations. We had told Willow she would see horse and buggies, but of course on our way out there we saw nothing of the sort*.

Here is Willow and her future husband, Soren: 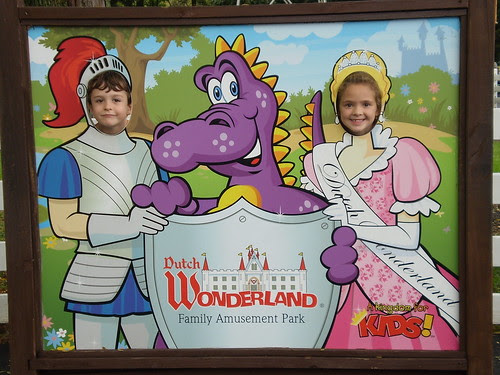 Jenny and Soren on the ski lift behind us. I didn't know this at the time, but they were having a bit o'drama - apparently some bees decided to be friendly while they were on the ride. And she is holding on to him tightly (as I was with Willow) because skinny kids would have no problem at all sliding out of this one! 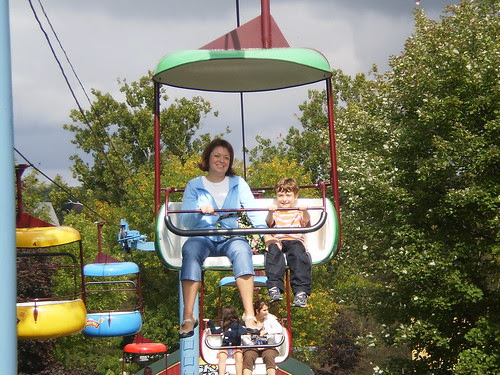 Willow and I on the carousel. I wasn't happy with the look on my face in this picture and I must have tried taking about 10 more, but it was a fluke to have us lined up like this. All the others have Willow obscured by my hair or I only caught her feet! 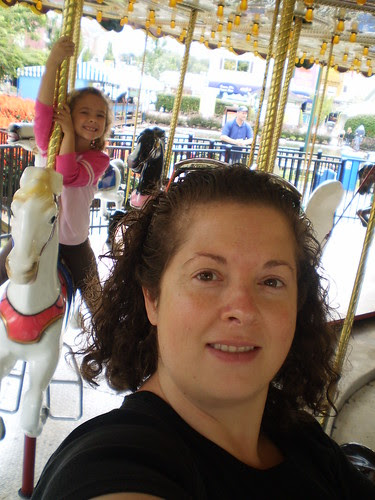 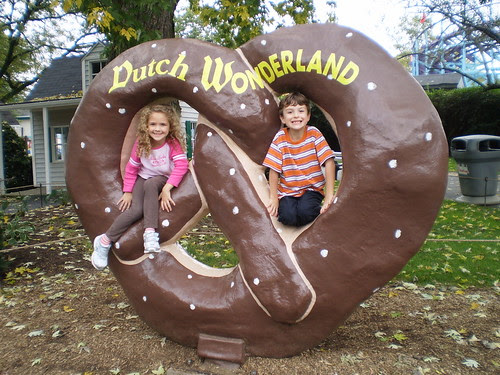 Jenny and I figure we should just book a hall now - we will save a lot of money booking it 20 years in advance. It is a good thing I am taking all of these pictures now - think of the photo display we could have at the reception!

(* They were out in force on our way back -we saw horse and buggies at nearly every intersection.)
Posted by Jo at 5:34 AM 5 comments:

I have *too* been knitting!

Especially with all the new TV coming on - I've been catching up on a lot of my projects.

Here is the vest I am hoping to finish so I can bring it to Stitches East when my friends and I head up to Connecticut next month. I've never worn anything I personally made to any of these yarn events - but I have always admired the stuff I have seen other people bring. 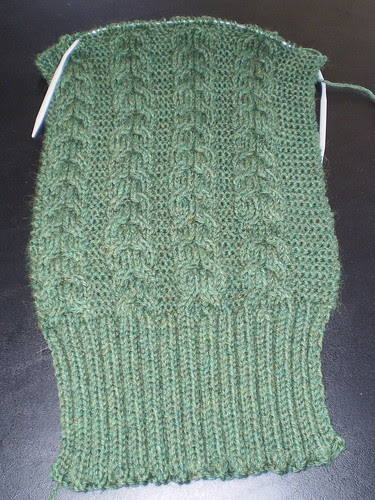 I've put a few pattern notes up on Ravelry - there are definite problems with the cable order and placement, but nothing insurmountable. I'm a little peeved that when I emailed the pattern manufacturer to let them know of the errata I got a message back that basically said, "We don't know what you are talking about" and kind of inferred I didn't know what I was doing. I also contacted the pattern author and she said she would look into the errata.

And here are my 2X2 rib Cucumber socks. Now that we're in the home stretch and one needle is all knitting, these socks are zipping by. These socks are definitely for me - I love everything about them - the colour, the 2X2 ribbing (although that is a pain in the ass to knit ad nauseum), and the fact that I will be turning the cuff down and it won't interrupt the pattern. 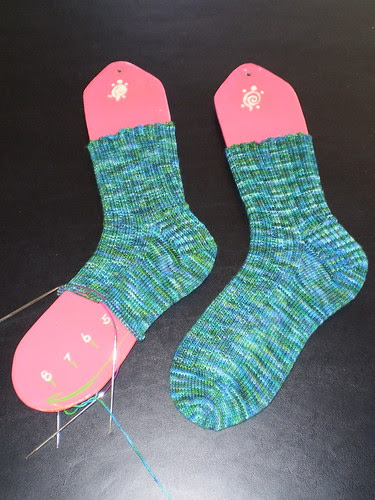 I want everyone to give three cheers to my Dad, Guy. He's 61 years old and he completed the 56km Great Lake Walk around Lake Cowichan on Vancouver Island yesterday. 56km is 14km (8.6 miles) longer than a marathon, and part of this walk is up a hill. Yay, Dad! I am so proud of you!
Posted by Jo at 2:25 PM 5 comments: 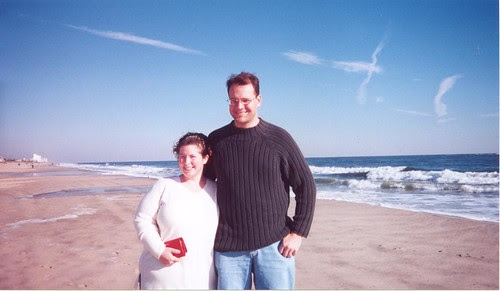 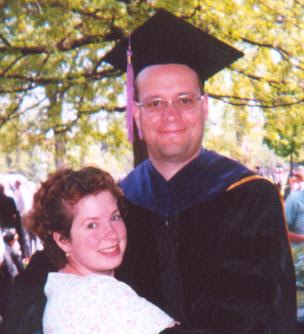 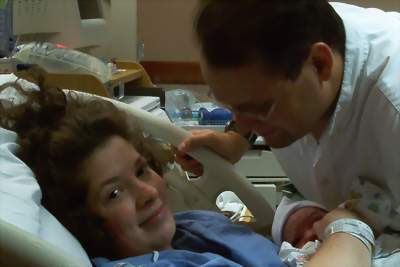 I don't seem to have many pictures of us together, but those I do have wonderful memories in them. I love you!
Posted by Jo at 5:53 AM 14 comments:

And *This* One Is Definitely Not For My Mom

Guess where we spent the day? 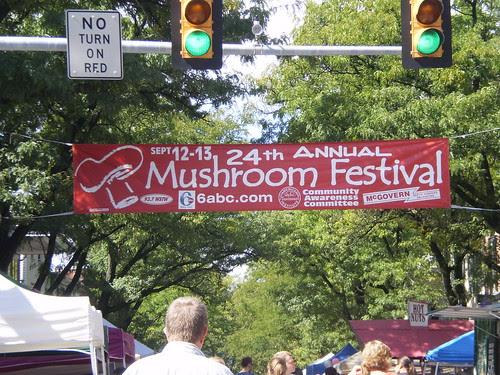 We went to the Kennett Square Mushroom Festival with our friends Gara, Keiko, Ray, and Ty. We have lived here for 8 years now, and not once have we gone to this festival - and it is only about 20 minutes away from our house! Kennett Square is the mushroom capital of the United States - and being a mushroom lover, I knew I was in for a treat.

We arrived early (when there was still place to walk in the streets!), and were able to see some neat vendors for both foods and arts and crafts. We picked up the requisite kettle corn (which unfortunately, was only so-so), and then found one of Willow's favourite things to do - pan for rocks and jewels: 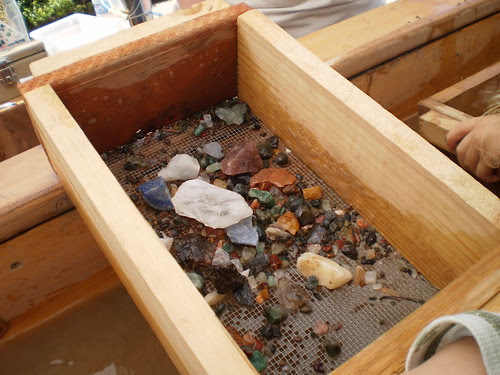 I love doing this as well - look at that big hunk of crystal in the middle! Willow and I are big fans of rock-hunting and beachcombing - we're trying to find a place to go on vacation where we can do this sort of stuff.

I had a steak and mushroom sandwich that had four different kinds of mushrooms in it from the Brown Derby restaurant (very yummy!). Andrew had a huge broiled portabello mushroom cap topped with crab and cheese. Willow had...um... a hot dog. 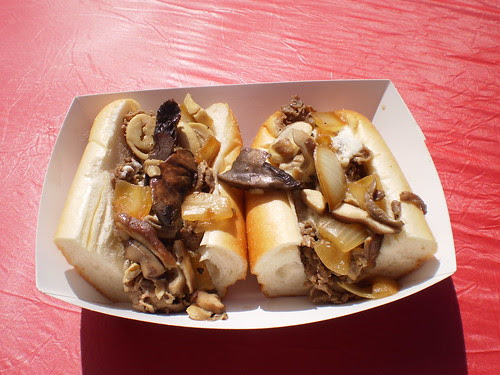 The festival was getting very crowded by this time - it had rained the first day of the festival so I think everyone came out in droves on Sunday when the weather was nice. We stopped by the La Michoacana Homemade Ice Cream stall to have fruit bars - here is Ray and Willow enjoying theirs: 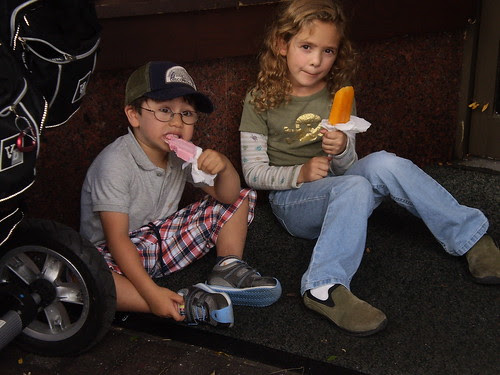 Gara had corn ice cream that he sprinkled with cinnamon. I was a little suspicious at first, but it was very tasty. I think I will definitely have to try that the next time we are in Kennett Square.

By the time we had to catch the bus back to Exelon (where the festival parking was), we were pooped out. Well, the adults at least. Willow and Ray were running around like maniacs until we told them (okay, yelled at them) that they had to stay in one place while we waited for the bus. 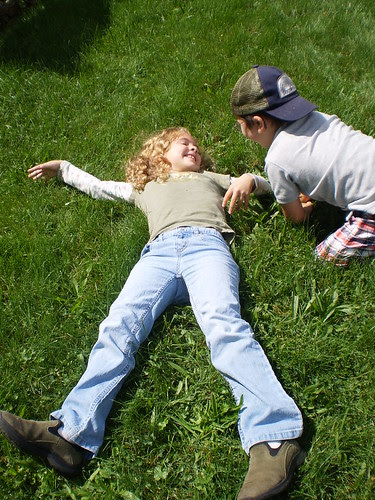 We had a great day. It was warmer and sunnier that I was expecting and I felt quite over-done by the time we got home. I love local festivals like this - you get to see some creative vendors, eat some delicious and different food, and walk around a great little town.
Posted by Jo at 6:51 PM 4 comments: 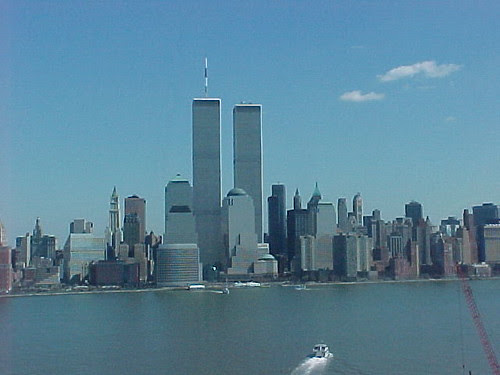 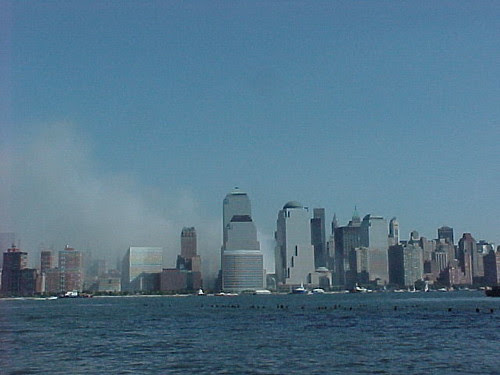 Both photos were taken by my friend Asami, who used to live across the Hudson River from the Twin Towers. I'm so happy she only lives 20 minutes from me now.

It's a heavy day. Willow is getting old enough to hear something other than, "9/11 is a sad day for many people because some bad things happened that day." I am just floundering on what to tell her and how realistic to make it.
Posted by Jo at 4:08 PM 3 comments:

This one's for you, Dad 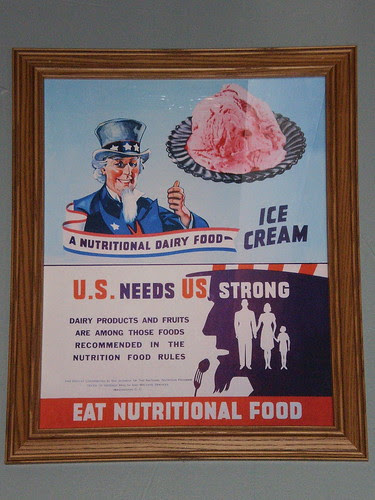 Uncle Sam wants you to eat cold cream soup, Dad! It's good for you!

Straggling Vacation Snapshots and Socks That Weren't Meant To Be

Yes, more photos. When we went to Canada I took my newer digital camera, and I let Willow take my old Nikon Coolpix to take pictures of her own. About halfway into our vacation the battery on my camera petered out (and it is one of those weird flat batteries that has to be charged in its own special charger which I neglected to bring with me against my husband's better judgement - there, Andrew - happy?) so I commandeered Willow's camera.

A new totem pole in the Vancouver Airport. I'm not sure what I think about this one - I believe it is part of the sprucing up of the airport for the Winter Olympics in a few short months. It's rather stylized - I wasn't sure what was bothering me about it at first, but then it hit me: 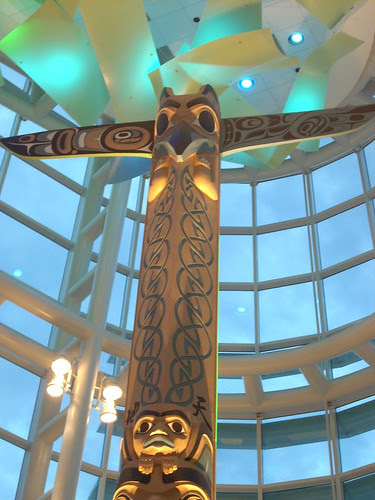 Isn't that design in the middle rather celtic? It isn't really what I perceive to be a First Nations design at all. It's nice, but unexpected.

Here's Willow at the bottom of the same totem pole, looking like she is about to drop: 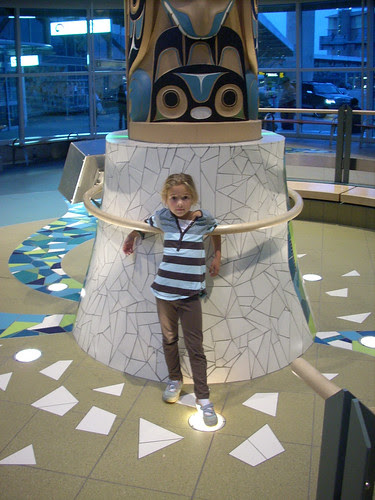 And this is what happens when two little girls get tired of Mama/Auntie and Gramma snapping pictures of them when they look so cute in their matching tops. The younger gets weepy and the older gets pouty: 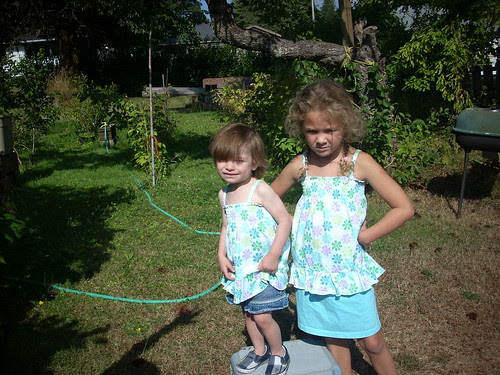 And these are socks that are not meant to be. This is the Fleece Artist yarn I bought on the Island, and it has absolutely no give whatsoever. At first I thought I would give them to my sister Teri since they obviously weren't going to fit me. After a while I doubted even Teri would get these on so I had Willow try them on, and they were a snug fit on her. So much for getting gauge for a Ladies' medium, huh? 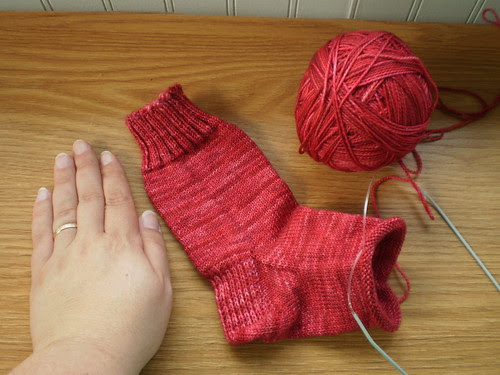 The yarn is very pretty, but I am going to have to rip out the sock and come up with something more elastic for it. Any ideas?
Posted by Jo at 6:46 PM 5 comments:

Saving For A Rainy Day (or, a colder one, at least) 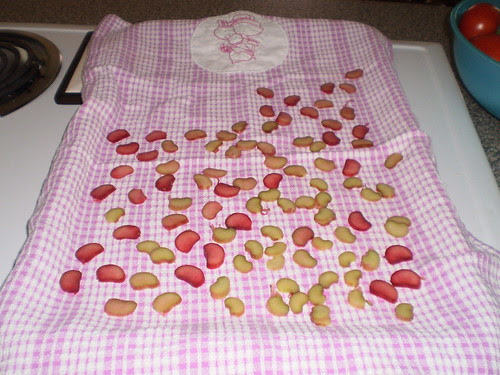 Not the picture you thought you would see from that caption, huh?

I have been slicing up rhubarb and freezing it to save for pies later this autumn when my Mom comes. I love rhubarb and I hate it when it gets to that time of year when it is no longer growing in the garden and you can't buy it in the store. I'm dreaming of pies, cobblers, and crisps when the weather gets cool...
Posted by Jo at 5:48 AM 2 comments: