If you have been following along on Facebook, you know that I recently had an issue with bugs in my acrylic stash. I am not sure when this started, but am beyond grateful that I normally bag up my more expensive wool, so that stash was not really touched by my purging a few garbage bags full of yarn.

This project wasn't touched by the bugs (which I believe to be carpet beetles, but the bugs guys will tell me for certain next week), but seeing as that it hasn't been bagged and has been languishing on the needles for 4 years, I thought I had better just cut my losses and change what was supposed to be a lap blanket for my sunroom into a shawl for Willow.

We went down to the Wilmington Riverfront yesterday to have lunch at Iron Hill Brewery and play at the Delaware Children's Museum, and took advantage of the great scenery for the pictures.  The light was not fabulous in this direction, but it was the only way I could get Willow to open her eyes. I need to start carrying around sunglasses for my special snowflake or I will not get any decent pictures. 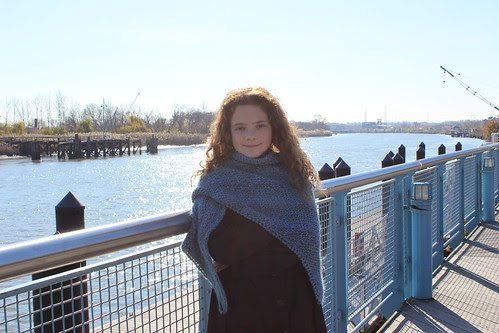 This was the first picture attempt (after much cajoling/teetering onto yelling on my part, she agreed to have her picture taken with her eyes closed) - with better light. 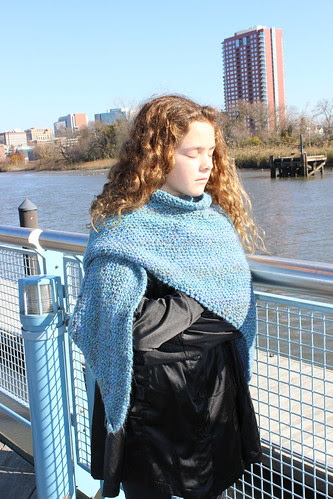 Wilmington in the background - it isn't the prettiest city on the East coast, but like the rest of us, it is attractive at the right angle. 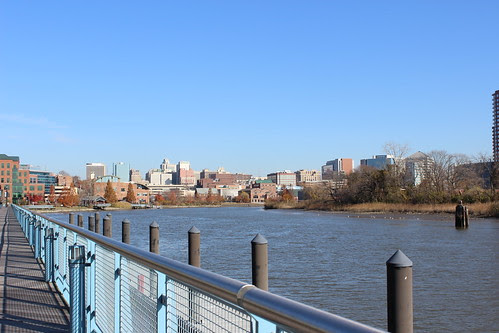 The Particulars: Pattern: Grandmother's Favorite Washcloth (Rav Link) - completed about halfway.
Needles: Size 10.5" 36" circulars
Yarn: Lion Brand Homespun, 2.5 skeins in a blue/green/grey colorway
Would I Knit This Pattern Again? As a washcloth, sure! As a blanket (as this project was originally intended) or a shawl... eh, maybe not. The monotony got to me after a while, and Homespun isn't my favorite yarn to work with.
Posted by Jo at 8:32 PM 1 comment:

This is not a new finished object. In fact, this is a sweater that I completed back in May - but at that time, it ws much too hot to wear, and it was a bit too big for Piper. So, it was washed and folded, and put away for a cooler day. 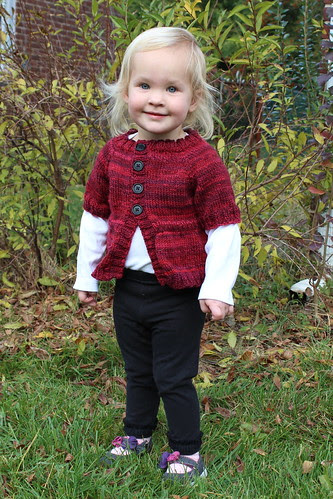 Well, that day was today! 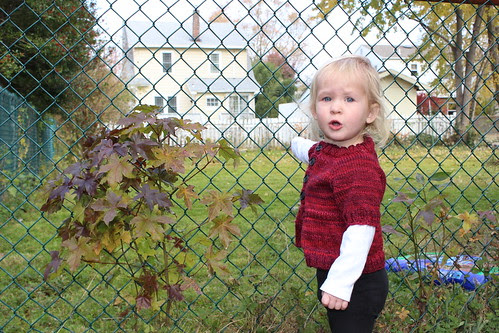 Piper telling me that Merlin (our neighbour's great dane) is barking.

I'm actually accomplishing two things here - taking better pictures of Sam's great sweater pattern, and playing with my new camera! Andrew gave me a Canon Rebel EOS T3i DSLR - this was my anniversary, birthday, and Christmas present all wrapped in one. Oh, I love it :) 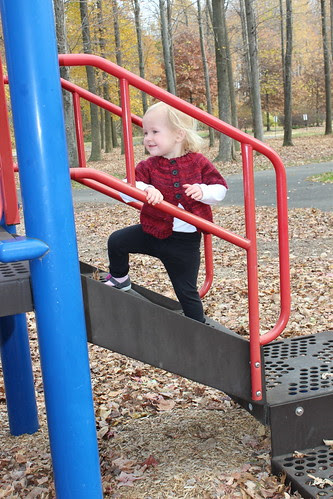 Watch me climb the stairs! 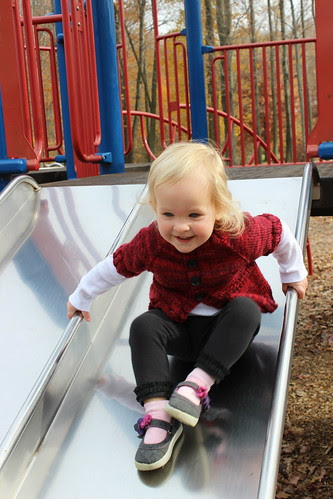 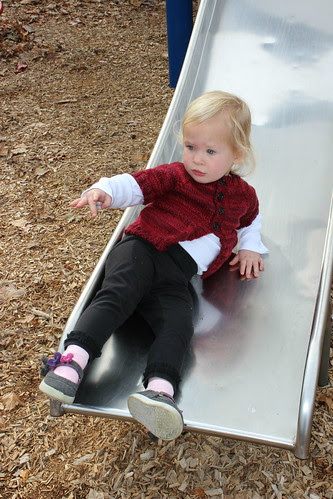 Dog dog! (The playground is near the dogpark and there are always dogs walking by.) 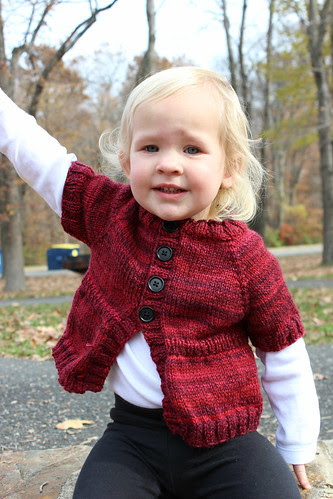 See see! (There was an airplane in the sky.) 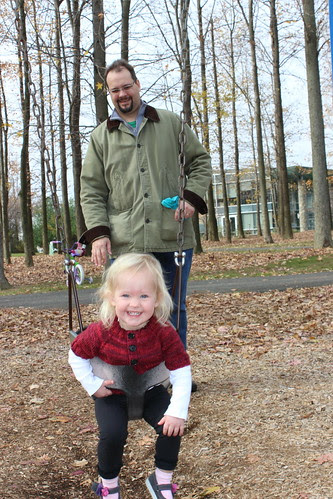 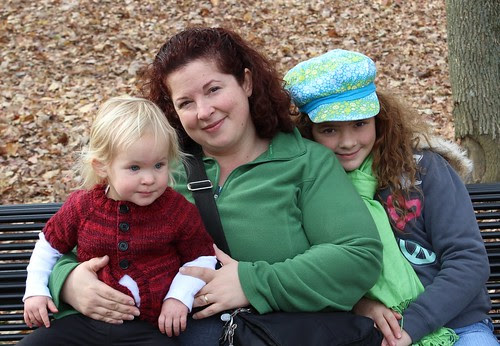 Me and my beautiful girls. 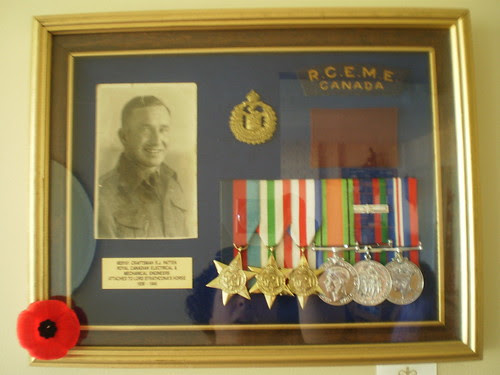 Look at what we just picked up half off at Target: 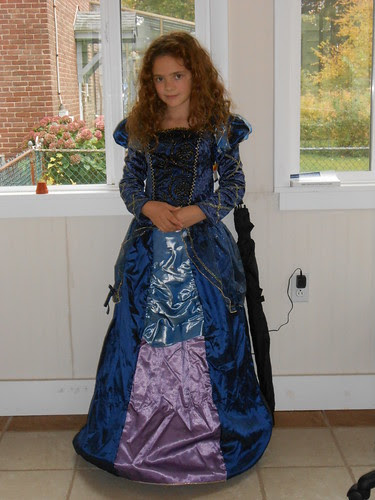 It's a great deal, because Willow will be able to do double duty with this dress next year between Halloween and the PA Rennfaire. 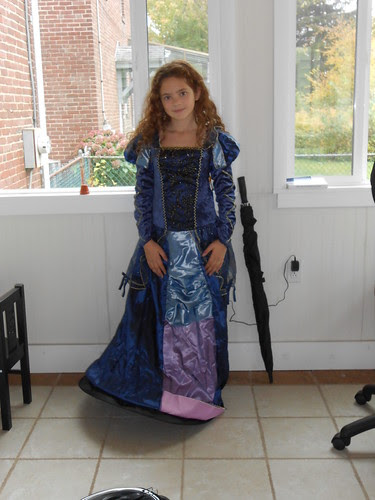 She looks gorgeous, doesn't she? It's a little scary to think that your 10 and a half year old daughter fits very well into Ladies size small clothes. Even scarier to think that next she will be wanting to buy prom dresses...
Posted by Jo at 11:29 AM 2 comments: