Book Review: The Here and Now by Ann Brashares

The Here and Now by Ann Brashares
My rating: 4 of 5 stars

I received this ARC from Netgalley in exchange for an honest review.

I don't think I have ever read a book before that has made me more afraid of mosquitoes. Prenna is a 17 year old immigrant, who belongs to a community of fellow immigrants, all of whom live quietly and do their best to not interact with outsiders. Like other immigrants, Prenna watched TV to learn American ways of speech and pop culture - but unlike other immigrants, Prenna didn't come from a different land, but rather a different time. She and her community are refugees, really, from a time of Blood Plagues, ecological disasters, and food shortages - sent back in time because they were immune to the diseases of her time, and in hopes that the immigrants would be able to somehow fix what went wrong before it happened.

But in truth, that wasn't what was happening. Five years into her new life, Prenna sees that nothing is getting fixed. The immigrants have strict rules hanging over their heads - no outside medical care, no telling people where (when!) they are from, stay out of the public eye, no unnecessary fraternizing with outsiders - and people are being bullied and disappearing. Prenna is doing her best to keep her distance from Ethan, a school mate, but Ethan has no intention of staying away - and he knows much more than Prenna can imagine.

I really enjoyed this book. Once Prenna opened up and started describing what life was like in her natural time, and what had lead up to all the diseases and disasters, I was transfixed. It really wasn't too far into the future, and you can easily draw lines from where we are now to how Prenna's reality came to be. I found myself trying to tie the rules that subjugate the immigrants to what happened in their natural time, and not always making the connection (Why no organized religion? To take the temptation of confession away?). Prenna and Ethan's romance was both innocent and enticing, and the moments that they were together had me holding my breath and wishing the scenes was in slow motion. Their plans to fix the timelines and stop horrible things from happening seemed a bit incongruous and convenient at times, but I let that slide because I was too interested in finding out what was going to happen next.

I would recommend this book to young people age 15 and up. Now, off to buy myself some mosquito netting and DEET.

View all my reviews 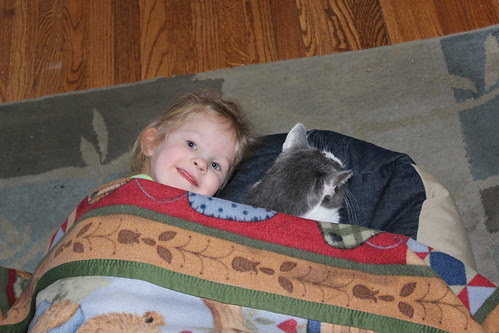 Lucky has been a grumpy old man cat of late. We're not really sure if it is just him - we adopted him as an adult cat, and the vet said he could be as old as 13 years old now. Or, maybe it is just the comparison to having a teenage cat running around like a crazy girl. Once he is in a good spot now, he doesn't want to leave - even if it means having the three year old curl up next to him and pulling a blanket over him.

Undone by Shannon Richard
My rating: 3 of 5 stars

I received this ARC from Netgalley in exchange for an honest review.

I have to say up front that I am giving this book 3/5 stars more because I would love to travel to Mirabelle, FL, than to give the rating because of the writing. I requested this book to read because I like fish out of water stories, and the fact that Paige was from Philly (where I am now) piqued my interest. Paige is a young artist who has experienced a series of setbacks - her best friend and roommate moved away for a new job, she lost her own job, her boyfriend broke up with her - and all of this has cumulated in Paige moving in with her parents, who have retired to a small town in Florida. Paige is miserable there; simply put, she does not fit in. She wears bright colors, goes running in short shorts, and spends so much time in her parents' shed-now-art studio that the neighbors think she is having illicit parties in there. It has come to the point that people in town are inviting her to job interviews just so they can laugh at her. She meets Brendan, a local man who has had own problems fitting in despite being from Mirabelle, and the two fall in love.

One of my issues with this book is that Ms. Richard has a grand vision for this series, and as a result the storytelling is not very tight. As this is the opening book, she has to introduce you to so many characters and places and events, that somehow the main characters get lost in the shuffle. So many times in the course of the story I found myself wishing there was a cast of characters listed so I could follow along with who was related to whom. There are many hints as to who will be paired up in future additions to this series, and I think maybe I would like those stories better, partly due to the characters up for pairing, and partly because the world and character building will have been established.

Another issue for me was the lack of closure with certain events, and I hope that these issues get resolved in future books. One of these issues was the local gossip blog - I don't understand how that character could get away with such flaming defamation and the local police say there is nothing they can do about it. Some characters were so downright nasty (Verna and Missy, I'm looking at you!), a reader really has to hope they get what is coming to them. My personal wish is that we find out that the two of them have been embezzling from the funeral home and they end up going to jail.

When I finished reading the book last night, I found myself feeling rather meh about Paige and Brendan. They were sweet together and good for one another, but I had a hard time getting excited about them. As I mentioned at the beginning of the review, the location was another matter altogether. I think Ms. Richard did a fabulous job of imagining Mirabelle - the beaches, the boardwalk, the cafes, the festivals - even the funeral home!

View all my reviews