I had to pick up Willow after a fieldtrip tonight, and after a hot, sunny day, it got dark in a hurry - as in about 15 minutes, starting around 7pm. Luckily, I had my new camera in my purse, so I started taking pictures of the skies as I was waiting for Willow with my shiny new red camera (Nikon Coolpix S4300).  You can still see the blue skies behind the clouds, and yes - the wind really was that loud!

I have to say I like the HD video, but it takes forever and a day to download. If anyone has any tips on that, I would appreciate it!
Posted by Jo at 9:00 PM 1 comment:

We have a pair of wings around the house left-over from one of Willow's Halloween costumes, and Willow and I decided to put the wings on Piper. 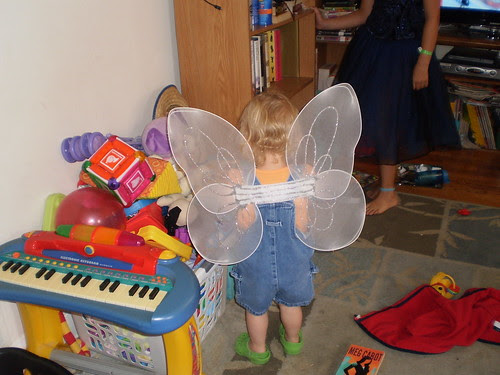 It worked at first, but no matter what I did, I couldn't get a straight-on picture of her. 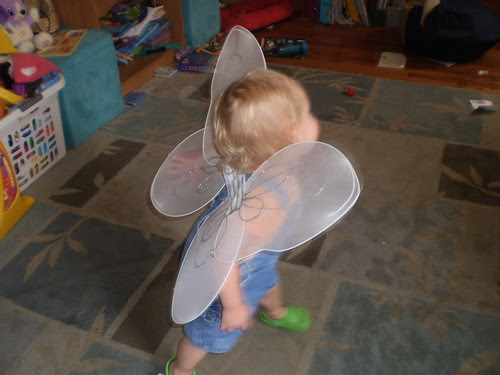 But then I had an idea! I would take a video of the elusive Piper-Fairy in action! 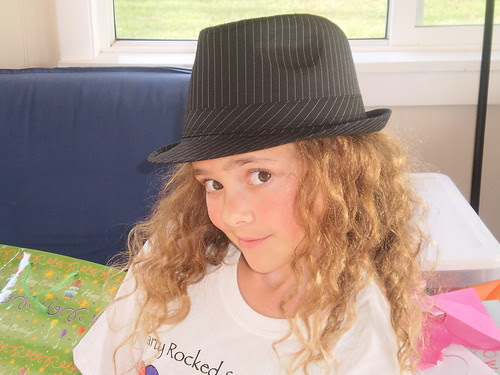 Yes, Willow at ten is this cool. She is my brainy, earnest, believes-in-the-good-of-everybody, I'm-going-to-win-it-all, creative, nurturing, smart-ass daughter, and I hope no one ever dares to knock any of that out of her.
Posted by Jo at 7:03 PM 1 comment:

It was Willow's Camp Carnival tonight, and Piper got her first taste of the childhood tradition - the moonbounce!

She loved it, but really didn't understand how to move at first. Luckily, we were able to get into one of the moonbounces where there weren't any other children in it, so Willow was able to play safely with Piper without someone else going crazy in it.

Willow, being the best big sister, also took Piper on some of the big slides, which also proved to be a big hit: 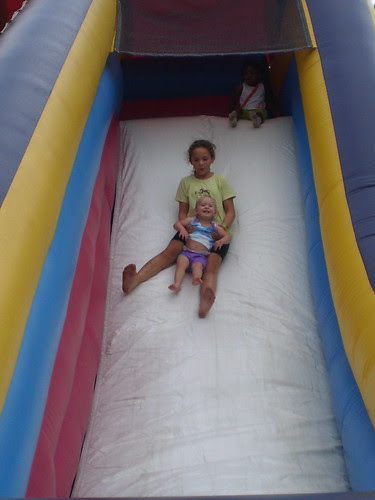 And I'm sorry - but you will have to tilt your head to the side for this one - for some reason my camera won't let you rotate the video if you have taken it sideways:

I just loved watching Andrew chase Piper and Willow around - they were all so happy.
Posted by Jo at 8:20 PM 1 comment: 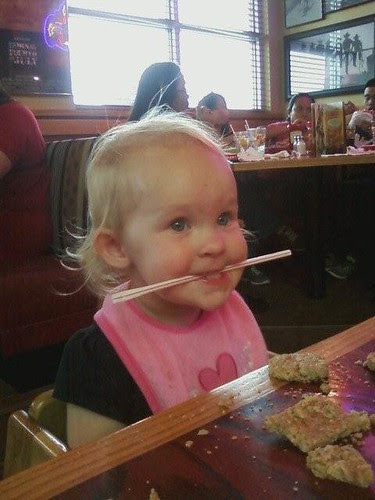 Like earlier in the week when there was a rip-roaring thunderstorm at 5:30am, so I couldn't jump in the shower like I normally do. I went downstairs to make coffee, and Andrew took care of Piper. I brewed the coffee - our favourite is Starbuck's Yukon Blend in the french press. Yes, we really are coffee snobs. I went into the fridge to get the creamer and indulge in the best cup of coffee...

And There Is No Creamer.

Andrew comes down with Piper, and I tell Andrew there is no creamer - and my husband - this will tell you how much he knows and loves me - hands me Piper and says, "Let me get my jeans on." He went out to ACME at 5:45am to get creamer in a thunderstorm.

Later that night I was on Pinterest and saw a pin that my sister Teri had posted for Vanilla ice cubes and wondered if you could freeze coffee creamer. I queried my friends on Facebook, and the general consensus was that it should be possible. So, I went rooting through my scary tupperware cupboard (really, don't ask - we're both happier that way) and found a silicone ice cube tray, and then filled it with creamer: 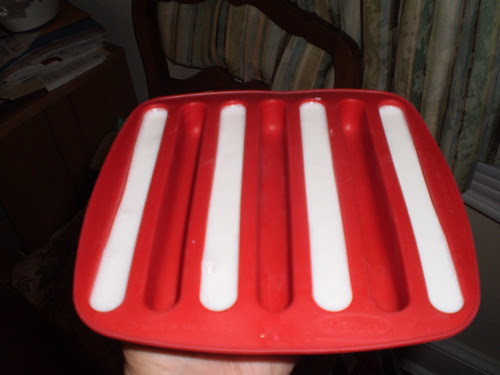 Yes, not your standard ice cube tray - it is actually intended to make long skinny ice cubes you can put in water bottles, but it was all I could find. We normally buy bags of ice. Here is the frozen coffee creamer the next morning: 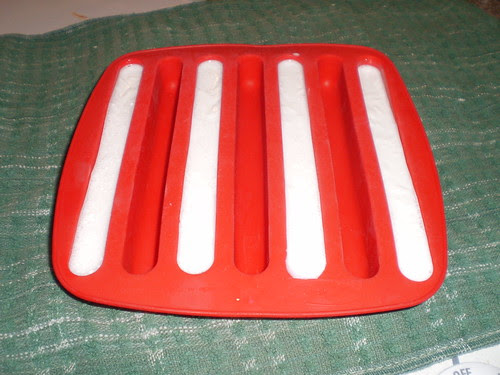 It solidified - that was a good sign! Part of me wondered if it tasted like ice cream. Have you ever tasted just coffee creamer without the coffee? To me the french vanilla stuff kind of tastes like liquid marshmallows. Here is one of the frozen sticks melting in my coffee: 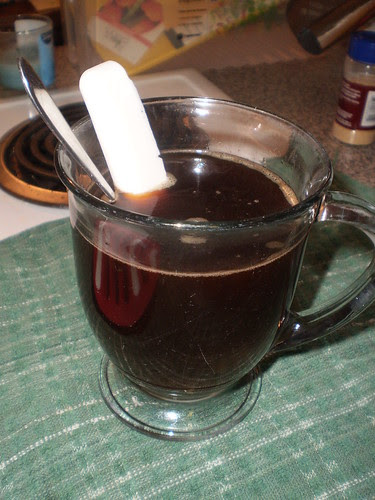 I ended up putting two sticks in - these are 16oz mugs - and it was perfect! 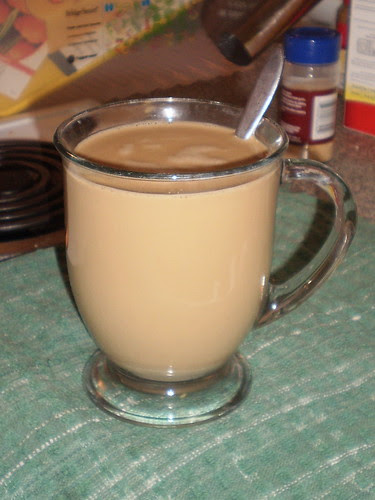 Me enjoying my coffee - so good! 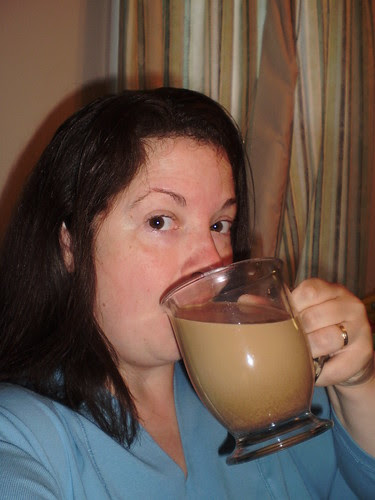 The experiment was a success - I don't think the frozen creamer cooled down the coffee a great deal more than the refrigerated creamer did. I can't attest to how long the frozen creamer would last in a ziploc bag since I used mine up the next day, but I think I am going to do this from now on when I have little bits left in the creamer bottle (and hopefully save me some angst when I find out one morning that someone has put the empty creamer bottle back in the refrigerator!)
Posted by Jo at 2:11 PM 1 comment: