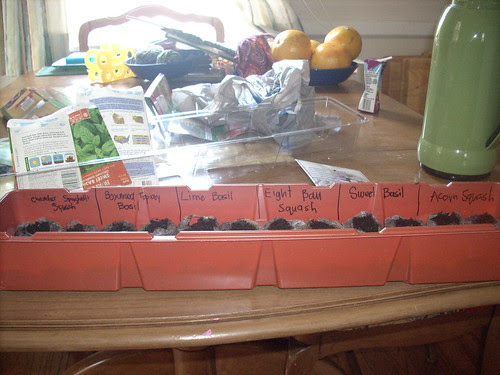 I started some seeds this afternoon - anyone want to take a guess what I like to eat? You'll have to forgive the handwriting - I was writing at a weird angle. I love these windowbox greenhouses - I have another one on the window for dark purple and red dianthus. I think I want to get another two - one for cosmos and the other for more vegetables.

What do you want to plant in your garden?
Posted by Jo at 3:57 PM 7 comments:

How Much Are Waffle Makers?

I want a waffle maker just so I can try out this recipe Mmm... savoury waffles! I'm not normally a fan of waffles - I find their sweetness to be cloying - but savoury, cheesy waffles and eggs - I think I could do that.
Posted by Jo at 6:07 PM 8 comments:

What My Birthday Says About Me

You know, I was all prepared to scoff at these results, but then this came up:


What Does Your Birthday Predict About You?

The bit about loving facts and figures and crunching numbers like a pro - that is me, dead on. I love it when someone gives me a task that starts with, "Factor in the current CPI-U and extrapolate what the..." Who knew! I like to think I'm all artsy-fartsy, but the truth is I am entranced by numbers and facts.
Posted by Jo at 5:55 AM 2 comments: 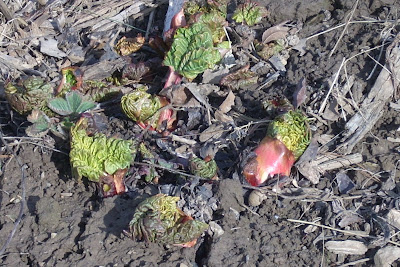 But the rhubarb is coming up! I also noticed chives and strawberry plants poking up through the dirt this morning. I really need to start planning my garden for this year - we're going to build raised garden beds.
Posted by Jo at 7:03 PM 6 comments:

Skating, Socks, and a Woo-hoo!

We went to Soren's (Willow's fiance, don't you know) birthday party yesterday afternoon - by my count it was Willow and 9 boys, and let me tell you, she was skating circles around them. 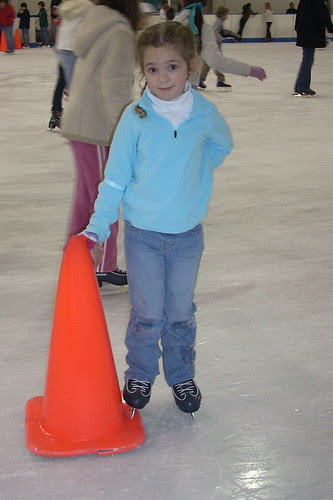 Literally. I think the skating lessons she has been taking these last few weeks have been a sound investment, and she really seems to be enjoying herself on the ice. I wish I wasn't so afraid of injury so I could get back out there with her! 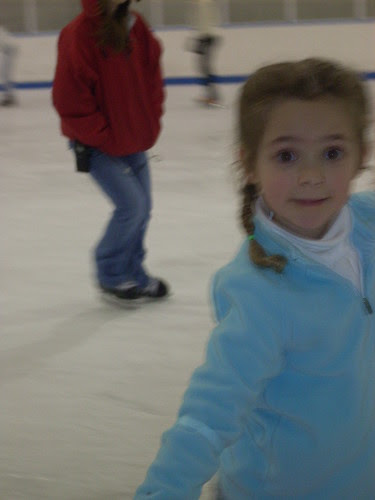 You can't really tell here because I couldn't get my camera in position quick enough, but she was showing me she can skate on one leg.

The birthday party dynamic was interesting - in this group of six-and-seven year olds, the line was already drawn in the sand. At one point the boys were all dog-pile wrestling on each other, and Willow took a flying leap and landed on top of them...at which point the boys all stopped and said, "You're a girl!" Soren's dad, Stefan thought this was hilarious. Willow didn't seem to care until the boys started playing shoot 'em up Star Wars games and apparently she wasn't making the proper swoosh sounds and they started ignoring her. Take heart, darling - they will all regret ignoring girls later.

I managed to finish the first of my Kermit socks this weekend - after they sat for about a week with only the kitchnering of the toes not completed. 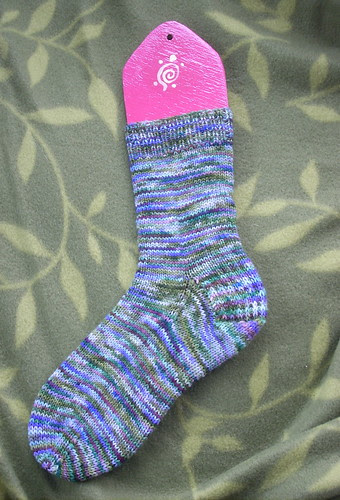 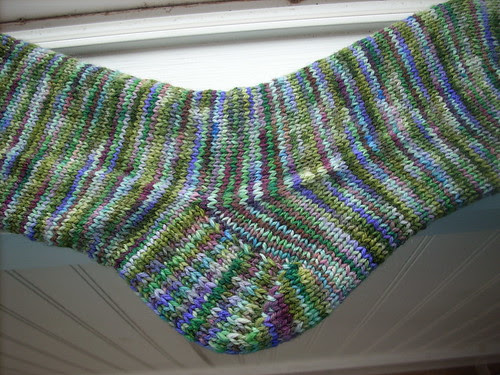 I'm a little puzzled over what to wear these socks with - because of my job I don't get to wear jeans often (we pay for the privilege on Fridays). Does anyone ever knit socks to match clothes they know they can wear to work?

As of today I have exercised for 20 days straight - even Sundays! I'm really pleased with myself and I feel great. I even managed to do something different today by attending a water aerobics class rather than just hitting the cardio room.

I'm not even sure how I stumbled on this website this morning, but I got here and my mouth dropped open. Then started watering. It's funny - I'm trying to be careful about what I eat - but I love food p*rn! It doesn't make me hungry - it's just that the pictures are so beautiful and gives me ideas of things to try.

...because everyone needs one first thing in the morning.
Posted by Jo at 6:03 AM 1 comment:

Finishing one skein in your baby blanket and knowing right away you won't have enough with the skeins remaining.

Going to Michael's after SnB and finding the exact colourway and dye lot I needed, despite the fact I bought the original skeins 2 months ago.

My car's 'door ajar' light won't turn off. We've opened and closed every door and window multiple times. My FIL found a nut missing for the hatchback window and temporarily fixed that, but the light still won't turn off. The dealership we go to isn't the closest one (because the closest one earned my enmity with the fuel pump fiasco - charged me $500 for something that didn't need to be fixed, then couldn't 'find' my problem (aka dumb woman doesn't know what she is talking about), and kept on pushing me to buy a new car rather than have the problem fixed) - anyway, it is a bit of a drive to the dealership. We drive out there convoy-style, Andrew and Willow leading and me following, knowing the garage will be closed, but we can drop the keys/explanation in a drop box and leave the car there. We arrive, and there is a gate across the driveway - the whole dealership is closed! At 3pm on a Sunday afternoon! It blew my mind - all these car industry troubles, when are people supposed to come to a dealership to buy cars - between 9 - 5 Monday through Friday?!?! In any case, we turned around and headed right back home. My FIL and I will have to try and find sometime during the week to drop off the car.

Then Again, Maybe Ice Skating Isn't For Me.

I lasted 10 minutes tonight. Ten minutes of locked knees, stiff hips, and in utter terror that I was going to fall again. You should see the bruises I have right now - from the ice skating birthday party a few weeks ago where I got kicked in the head and slashed on the calf with ice skates, to last week's three falls in 5 minutes** (one during which my skate must have made contact with my right inner calf which is every shade of the rainbow, heavy on the blues and purples) - if anyone saw me with shorts on right now they would think I had been in a horrible car accident.

Today at work I told my friend Ryan that I hoped I was getting better which each subsequent session at ice skating. Granted, it has been nearly 30 years since I did it with any regularity, but I know the basics. He took one look at my calf bruise and said, "Yeah, but there's the survivability factor."

He's got a point.

I know I am no longer one of those kids who can (and will) fall down every three minutes and have nary a bruise or sore muscle to show for it. When I fall, I fall hard and it shows. And the next day (and many days afterward), I feel it. There are other less jarring and much less damaging activities I am much better at - cycling, swimming, walking - and I think I am going to stick to my strong points for a while.

(** I would like to point out that these three falls happened *after* skating just fine for twenty minutes. Just saying.)
Posted by Jo at 10:07 PM 6 comments:

A Good Wife, A Bad Mother

The call came around 9:00pm last night that Willow's school district was calling a snow day in advance of the storm that was coming our way, so I knew I would be working from home today. It works well - Willow is old enough to keep herself occupied with toys, books, or tv - only pesters me for a snack or lunch. The snow was beautiful - I think maybe 6 - 8" fell - enough for it to cover the top of my boots. She wanted to go outside, but I told her she had to wait until 3:30pm when I could turn my computer off and be done for the day.

Three-thirty came, and she was all bundled up - was wearing long johns and two sweaters without me even having to tell her to. So, we head outside, and she played in the snow while I shovelled the front walkway, the driveway, the sidewalk going around the house, and the back steps - that's the good wife part of the story. Andrew was really happy when he came home to find out that he didn't have to do that. And going by how sore my arms and lower back are now, it was probably some good exercise.

But the bad mother part. Well. Willow hasn't seen much snow in her six years. We have had some dry winters, and it seems that whenever we do get snow, it is gone that same day... so she had never experienced something that was commonplace between kids when I was young. How many of you have had someone come up behind you and wash your face with snow? I can't think it is just a Canadian thing! Turns out she didn't see the amusement in it, and she started crying and calling me mean. Ooh boy, I felt about two inches tall.

I distracted her with the icicles that were hanging from our and our neighbour's front overhangs. I knocked some long ones down with the broom handle and we dueled until our icicles were broken to pieces.

One of these days I will learn to be a good mother.
Posted by Jo at 8:25 PM 7 comments: