Oh my, I was feeling guilty about this one.

This hat was my project in exchange for my friend Tara making Piper a Christmas stocking. I had bought the yarn well before Christmas, and had the pattern in mind... but just didn't have the time to cast on for the project until after Christmas. 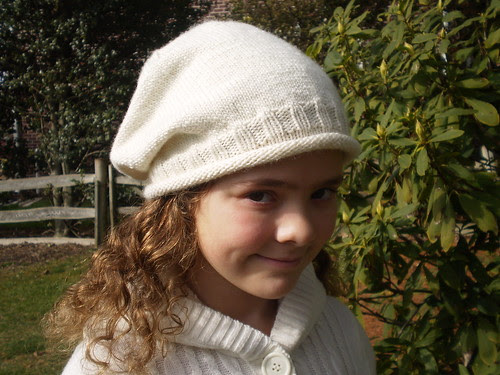 Side view of the slouch hat: 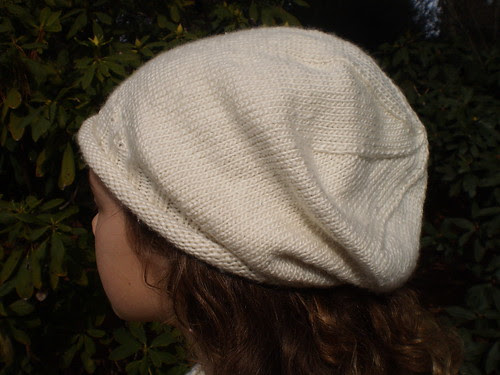 I cast on and sped along quickly at first... but everything ground to a screeching halt. This all started the week after Christmas - I treated myself to a facial, and managed to fall off the aesthetician's table, landing with my left palm flat on the ground, jamming up my shoulder. Knitting hurt. I couldn't do more than a few rounds at a time before my shoulder and collarbone would start to ache. Most nights I ended up taking Advil and going to bed with a hot pad on my shoulder. 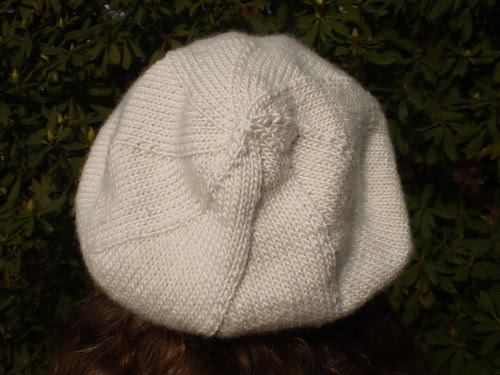 But I persevered. I tried to work on it a bit each night, but was starting to feel bad about how long a simple hat was taking me, especially since Tara had finished her part of the swap so long ago. Cue to this week - I had my normally scheduled doctor's appointment, and I told him about my sore shoulder, and how 4 weeks later it really didn't feel any better. He said I should get an x-ray - he had ruled out a torn rotator cuff, but there may be something else causing the continued pain.

Well. Had the x-ray, and he called the next day to say I had a hairline fracture in my collarbone. There isn't much to be done about it - it will take about 6-8 weeks to heal, and I can take OTC painkillers if needed. The diagnosis won't help it heal any quicker, but I am a little better for knowing that this pain wasn't all in my head!

And, although I made extremely slow progress, I finished Tara's hat. 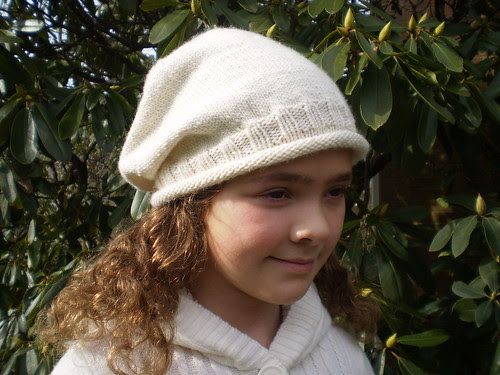 Pattern: Classic Elite's Fresco Simple Slouchy Hat in size Medium
Yarn: Great American Yarn's Superfine Merino/Silk (50g/143 yards) in cream, 2 skeins
Needles: Aero size 5 - 16" circulars and DPNs
Would I knit this pattern again? YES! I love how this hat turned out - and I think it is a good alternative for those who like the Sockhead Hat, but want something that can be knit with DK or sportweight yarn. In fact, I'm clearing a few other small things off needles so I can cast on for one of these for myself.

I kept Willow's baby clothes. For eight long years, I kept them washed and folded and in Rubbermaid bins. One thing I never considered while hoarding these clothes that I may end up having children in complete opposite seasons. True, both my girls were born during storms - but Willow a thunderstorm in July, and Piper an ice storm in February.

The itty-bitty baby clothes weren't much of a concern - newborn clothes are much alike, regardless of the season. However, now that Piper is wearing 12 month sized clothes, I have run into a problem. Willow's hand-me-down 12 month clothes are summer clothes. We had a high of 39'F today. I washed all of Willow's former 12-18 months clothes last weekend, and secretly lamented that there was so much cute stuff that Piper was just not going to have the opportunity to wear... but then I had an idea... 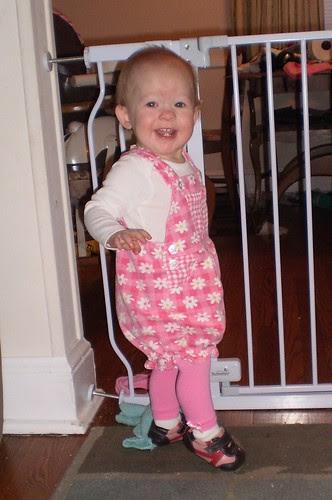 Leggings! I bought some footless tights at Target and she wore them under these cute pink and white plaid/gingham short-alls. She looked adorable! 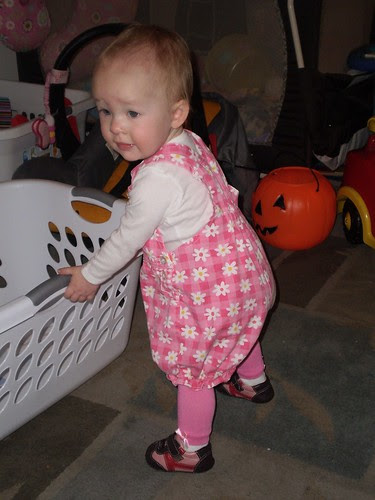 I'm going to have to go back and find some footless tights in a few other colours - I have 3-4 other paid of short-alls I can dress her in now! Leggings FTW!
Posted by Jo at 7:24 PM 3 comments:

The Worst Smell Ever 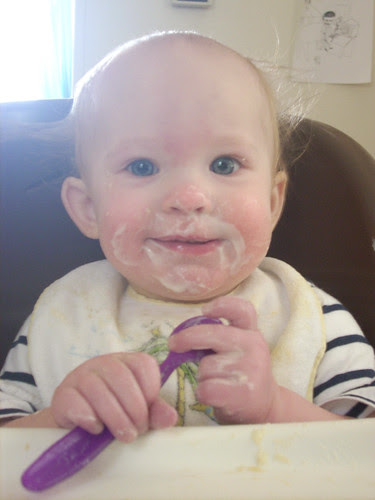 She looks happy and healthy, doesn't she? The picture completely belies what has been happening around here the last four days. An epic stomach bug attacked Piper's daycare and a bunch of kids, Piper included, were told to go home and not come back until the symptoms were gone for 24 hours. I thought I would be out for the day... cue 4 days later, and I thought I was going to lose my mind (not to mention my stomach) from the ungodly stench coming from my Piper Bean's posterior. It was funny - I thought I was going to get some sympathy from the doctor's office, and what I was told that I was lucky it wasn't coming out both ends. Ah well. As my mother is always telling me, it's one of 'the joys of being a mother.' She's getting better. Knock on wood, we've hit the 24 hour mark. Wish us luck!
Posted by Jo at 5:04 PM No comments: 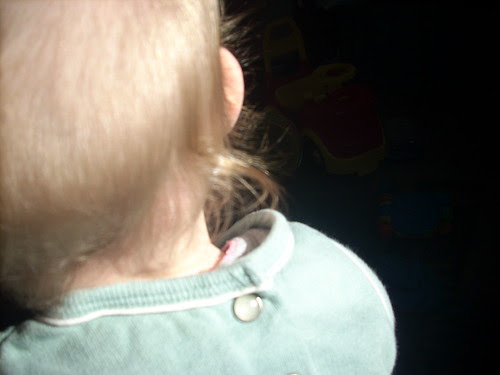 A First Time For Everything

I suppose I should consider myself lucky that I've been knitting for nearly ten years and this had never happened before. I finally finished the project that was occupying my size 5 circulars, so I started on Tara's cream slouchy hat. The yarn is a lovely silk-merino blend, and I was happily and speedily knitting away while Willow and I watched 'Mysteries At The Museum' when I noticed that something was wonky. 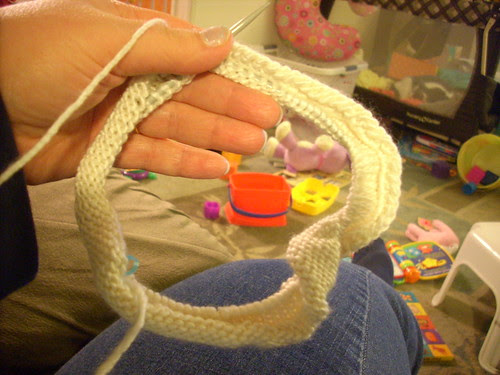 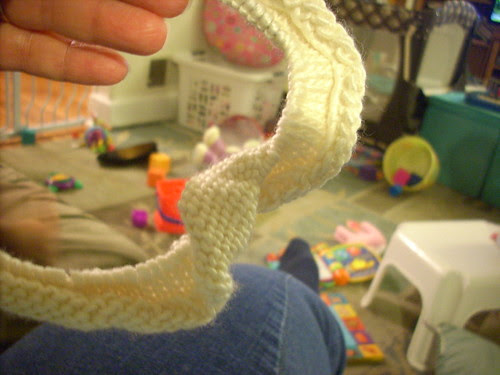 For you non-knitters out there, this should not happen! I had created an unintentional moebius by accidentally twisting my stitches when I joined the hat in a ring. Piss piss piss. I had to pull it all out - but not before this happened (and please forgive my scream):

I was holding up the nascent and not-to-be hat to show Willow what I had done wrong and Piper grabbed the yarn. Piper is fascinated by my knitting, and is not happy when I say these are Mama's toys, not Piper's toys. Oh well. Tara - I'm sorry my child flossed her teeth with your hat.

(Oh - And forgive the living room - it doesn't get picked up until Piper goes to bed - it's a sisyphean task otherwise.)
Posted by Jo at 8:22 PM 2 comments:

Just Because She Is Cute

She ate it all up! I went easy on the sauce because I didn't want to overwhelm her (and it was a mild Japanese curry roux mix), but she ate everything. What non-baby food can I feed her next?
Posted by Jo at 7:56 AM 1 comment:

I find myself looking forward to creating resolutions this year - it's the keeping of the resolutions that is the pesky part. This year is a big one for both me and Andrew. Not only do we both turn 40 this year, but our 15th anniversary is in September as well. With these things in mind, here are my 2012 resolutions.

1) Lose weight. I'm not setting a number here, but suffice to say, it is a big number. My willpower has been fighting a losing battle with stress, sleeplessness, and lack of coordinated time to have Piper and Willow cared for so I can exercise. I have already taken steps to alleviate some of these things, and I am really looking forward to exercising again.

2) Either finish or frog all UFOs. I could not even give you a rough estimate of forgotten and neglected works-in-progress I have in my bins. However, it is getting to the point that I can't locate needles I know I have to start a project... because they are languishing somewhere else. And other than 2 projects that I have prior commitments for, no starting a new project until one is finished! I frogged 2 things this morning.

3) Try a new recipe once a week. I am in such a food rut. If you have anything you think I must try, pass the recipe my way.

4) Declutter. You have no idea how much this is bugging me right now. Part of it is just Christmas and how we have to move things around to accomodate the tree, etc. - but a large part of it is we have a smallish house and a lot of stuff. Add a new member to the family, and the stuff increased exponentially. I need to start with the kitchen/dining room. I have seen some neat ideas on Pinterest to maximize storage, and I am looking forward to implementing them.

I think that is good for now - and if you have any suggestions or advice, pass them on - I could use all the help I can get!
Posted by Jo at 9:05 PM 1 comment: