I'm telling everyone that Willow is playing against type this year... 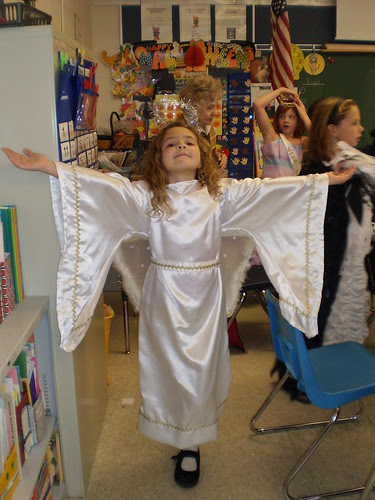 Costume courtesy of Grandma H, who has made almost all of Willow's Hallowe'en costumes so far. 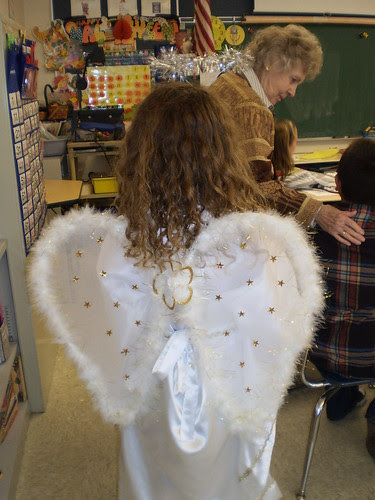 Halo courtesy of my friend, Gail, whose son had dressed up as an angel for a Christmas pageant and no longer needed the halo. 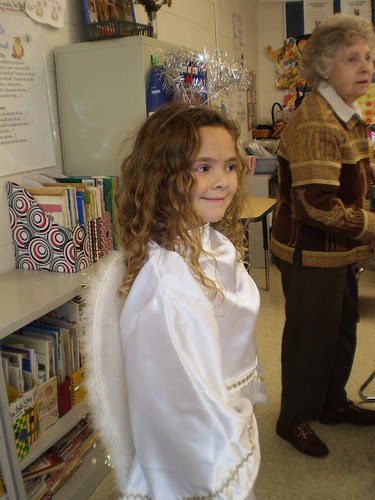 It was a great night for Hallowe'en - clear skies, dry, not too cold - and my little angel made out like a veritable bandit with the candy.
Posted by Jo at 7:08 PM 5 comments:

I love me a good hat - and I have to say with all due pride, Jo Is A Sheep Hat is a damn fine hat. 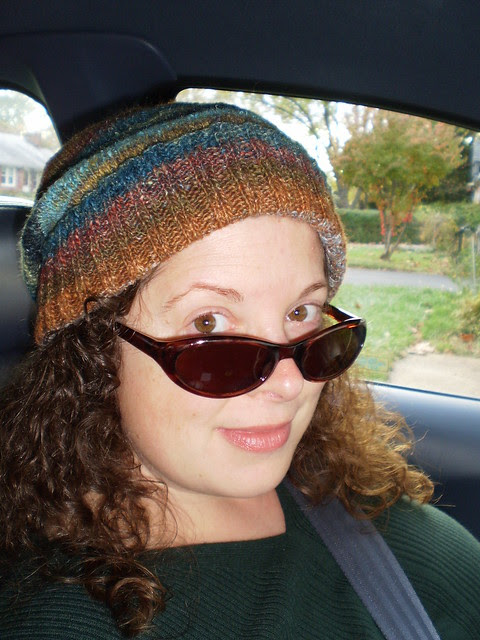 I started this hat because I saw so many cool versions of it on my friends' blogs, and Lord knows I have an excess of sock yarn in my stash (which in itself is a little silly because I wear sandals as long as I can physically get away with it). I bought this Noro Silk Garden sock yarn a few years ago because I love the autumnal tone of the colours. 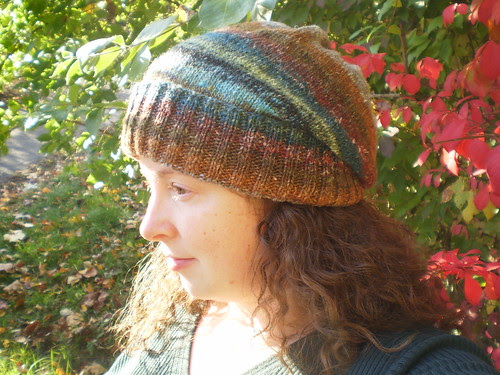 But of course, being Noro, you are going to have your requisite wtfuckery with the shades. After all the beautiful green, rusts, and grey, we segue into... teal and purple. Of course. 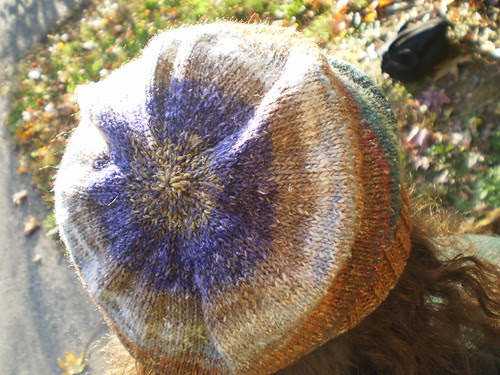 Oh well. What are you going to do?

The Particulars:
Pattern: Sockhead Hat (Rav link)
Yarn: Noro Silk Garden Sock Yarn colourway 245
Needles: Knitpicks Size 4 circulars and dpns
Modifications: Not much - I took Cristi's suggestion and went with size 4 needles without worrying about gauge, and my hat is a little shorter than called for by about an inch because I was worried about running out of yarn.

Would I make this pattern again? Most definitely. The pattern was beyond easy, and it was nice to have a lightweight slouchy hat made from sock yarn.

And I want to say something - I don't know whether that top shot was just a lucky one, but I will be 38 in less than 3 weeks, I'm 6+ months pregnant, and I am not wearing any make up other than chapstick in these pictures. Yay me :)

With the exception of the first photo (whichi was taken in my driveway), the rest of the pics in the post were taken in Talley Day Park. The fall foliage here in Delaware is at its peak right now and I am in awe of all the reds, golds, and oranges wherever I go. Here are some examples. 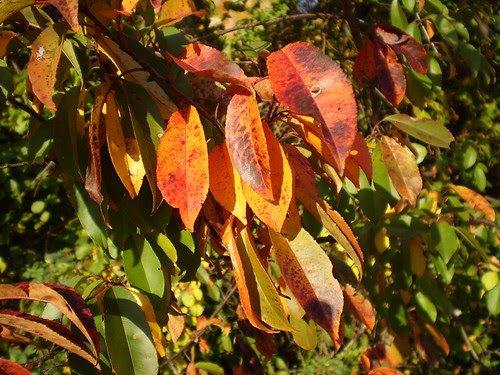 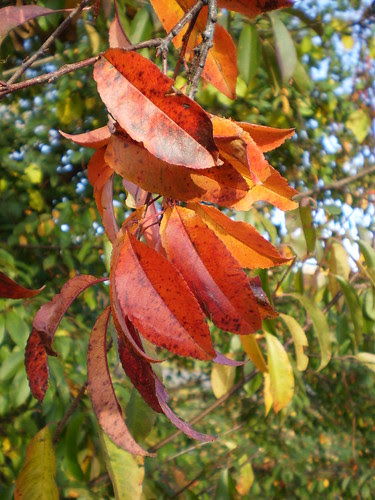 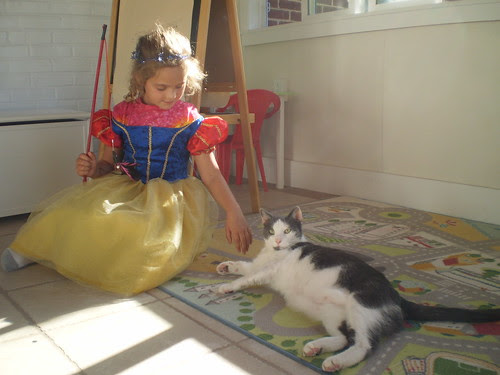 If you think you are getting a costume on me, you have another thing coming!
Posted by Jo at 6:03 AM 3 comments: 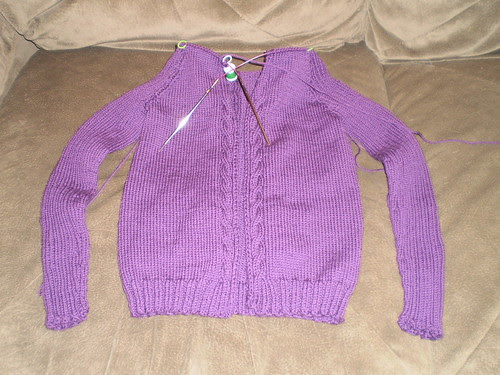 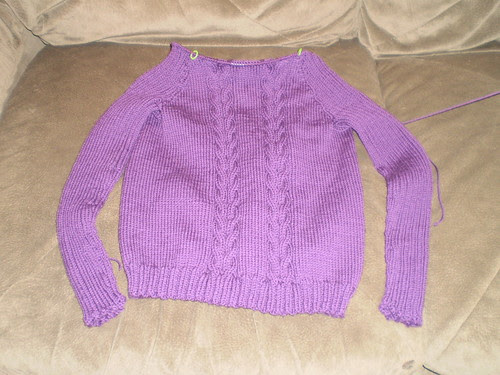 All I have left to do is the neck shaping, which I should finish tonight, and then the button band/shawl collar. Cristi was right - once you join the sleeves to the body, the sweater speeds up considerably. The miles and miles of 2x2 ribbing on the sleeves is enough to make one put down the sweater and pick up quickie projects for a while, but I'm really happy at how it is coming along now.
Posted by Jo at 5:56 PM 6 comments:

The Coziest Place To Be 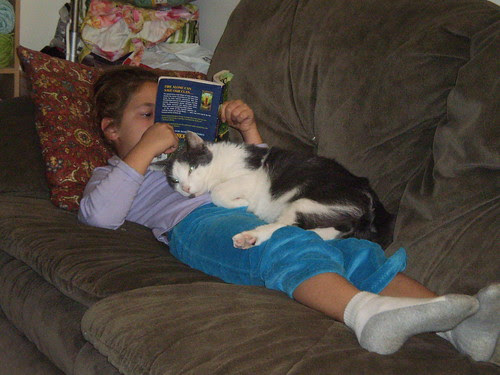 There is no doubt at all that Lucky is a lapcat. He may be pushing 16 pounds, but if anyone sits on the sofa he will become velcro cat within seconds.

What is Willow reading? Warriors: Into the Wild by Erin Hunter. This is the book she chose for her book report project - Booklist says it is for kids in grades 6-9. Willow is in grade 3. It's been a struggle to get her to finish it - the book has 288 pages and 25 chapters, so it is easily the longest book she has ever read. I don't think the content is above her - just maybe that the book isn't over in 100 pages and 10 chapters. Less than three chapters to read now!
Posted by Jo at 5:17 PM 4 comments:

Monday Pick Me Up: Yarn Pron

Don't you feel like you need a pick me up on a Monday morning? Feast your eyes on this pretty yarn! 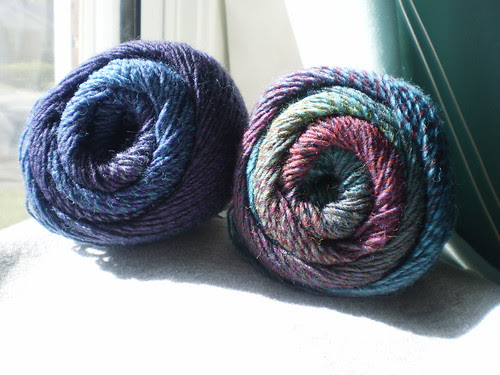 Right away when I saw this I knew I wanted to do a striped scarf with it, something along the lines of the Noro Striped Scarf. These two skeins are different colourways, but close enough to make the changes complementary.

Here's a close up of one: 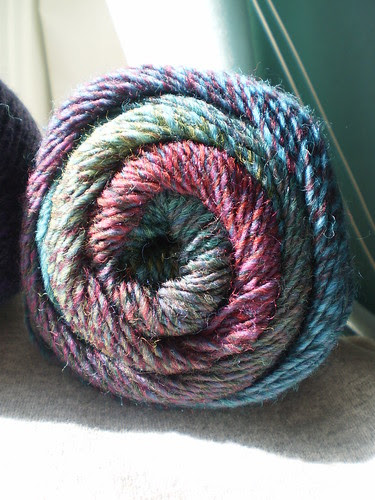 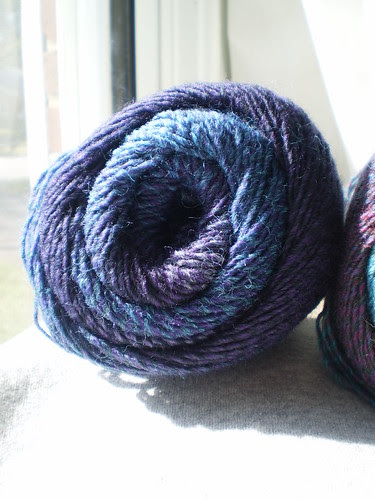 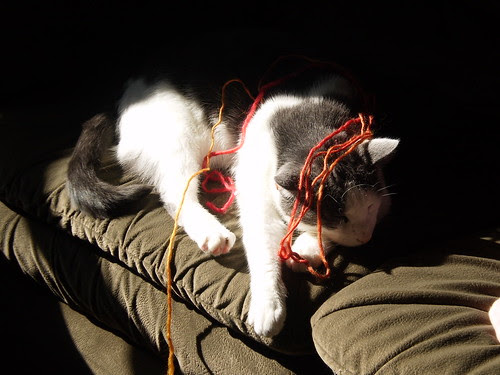 Either had no idea or just didn't care that he was being so cruelly molested with yarn.
Posted by Jo at 6:21 PM 2 comments:

A Resuscitated Finished Object (And Photoshoot!)

Oh my. This is how today's photoshoot started: 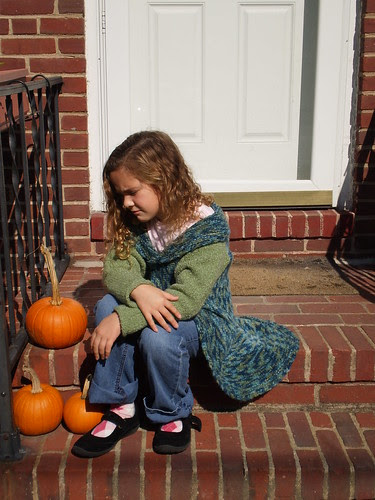 Willow got upset because the sun was in her eyes, and I told her to close them because I was trying to take a picture of the sweater, not necessarily *her* and that just set the whole emotional ball rolling...

Thank goodness for second takes. We went to the farm later in the afternoon to pick up our CSA shares, and Willow conceded to having her picture take again. 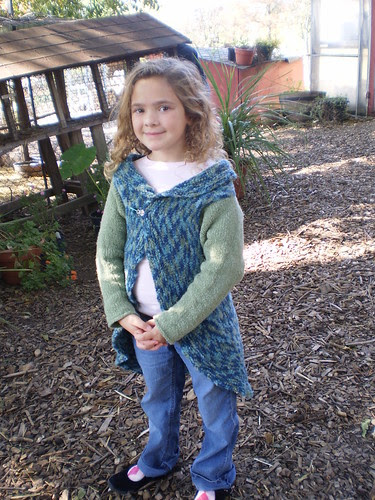 This sweater was actually finished back in July, but it was just too damn hot to have her wear it to take pictures. And I am a little embarrassed to say that I started the sweater back in 2007 - the summer before she began Kindergarten. Then about 4 weeks before school started we received a notice saying there was a dress code, and two-toned striped sweaters were definitely not allowed. So, the sweater languished in the UFO box until I started to worry that it would be too small for her by the time I actually got around to finishing it. 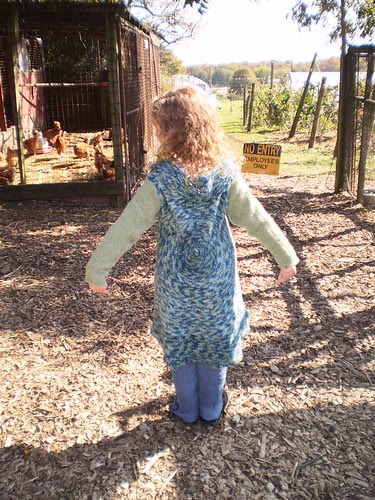 Apparently I didn't need to worry about that. She would have swam in this had I finished it back in 2007. 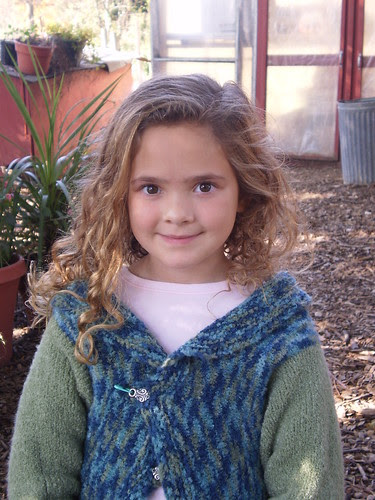 I don't care for the clasp I put in the front (hence the little knitting pin holding the sweater closed), but I will find some way to fix that. 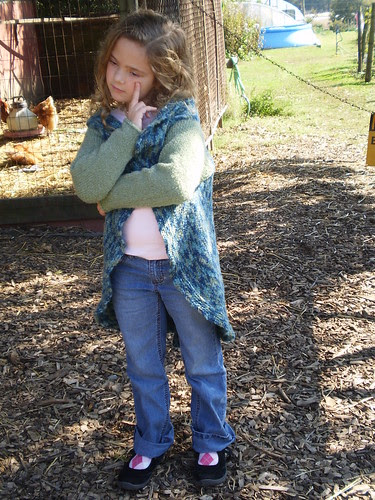 Willow pretending to be pensive.

All's well that ends well - this was the last shot taken at the farm (with our jack'o'lantern to be): 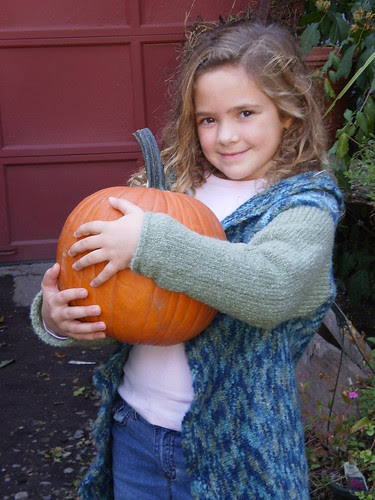 Would I make this pattern again? Not for Willow. It was an easy enough pattern, but she is like me in that she has no shoulders, so the sweater doesn't hang right without being held together in the front. Willow likes it, though - even if she thinks of it more like a bathrobe than a sweater!
Posted by Jo at 1:52 PM 3 comments:

Andrew and Willow have been very tolerant of my pregnancy craving - all I want to have is pumpkin. We've had pumpkin pancakes, pumpkin quick bread, purmpkin french toast, pumpkin yeast bread, pumpkin pie... and now we have moved onto pumpkin bran muffins: 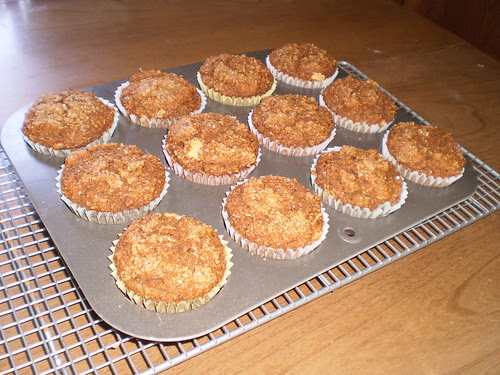 Don't they look yummy? Here's a close up: 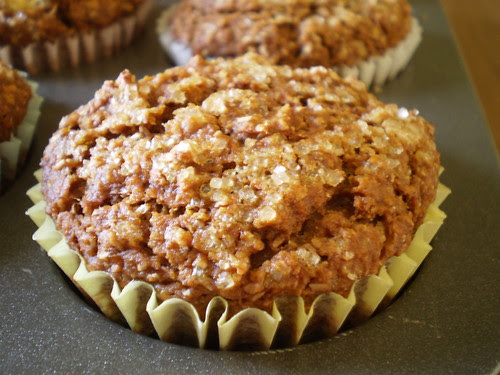 Click on the recipe title to get the recipe - the only thing I did differently is omit the raisins because Andrew and Willow are both freaky about raisins in baked goods. I had everything in the pantry except buttermilk - and now I need to find something else that requires buttermilk because the only container I could find was a half liter and I only needed 3/4c for the recipe. Any ideas?
Posted by Jo at 12:17 PM 3 comments:

... and with a 3 month old next year, I most likely will have to sit out MDSW as well - but I picked up something today that will almost make missing out on those two sheep and wool festivals worthwhile.

Feast your eyes on my Norden Gateleg table from IKEA: 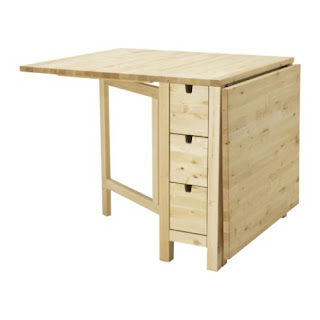 Just why is this table making up for missing the festivals? Well, I have lots of wool. Andrew says he considers the wool insulation to the house at this point. And honestly, I really don't need to buy more right now. I also have a beautiful yarn swift made from reclaimed wood and a wool winder courtesy of my knitting friends as a housewarming present when we bought this house.

What I didn't have was a table to connect the frickin' wool winder to! As my luck would have it, every table we had in this house has either a beveled edge, a rounded edge, or a false front - all of which make it impossible to clamp the wool winder to. I have so much wool that is still skeined and packaged from previous festivals - now I will finally be able to wind the wool (oh, all that beautiful sock yarn!) into yarn cakes and start knitting with it! I can't wait to start re-discovering my stash.
Posted by Jo at 4:00 PM 7 comments:

The Story Of How I Came to Accidentally Eat Three Breakfasts

For the record, I have only gained 11 pound so far this pregnancy. At my OB appt earlier this week, the nurse told me I had managed to lose 5 pounds since my last appt a month ago. Almost 6 months along and I still have people saying, "Wow! You're pregnant?!"

Anyway. This is the story of how I accidentally ate three breakfasts yesterday.

Normally I don't eat breakfast at home. We're always so busy trying to get ourselves and Willow ready that all I normally manage is coffee at home, and then have breakfast at work. Yesterday, however, Andrew decided to make breakfast quesadillas - and since Willow was not ready when her quesadilla was ready, he told me to eat hers, and he would make her another one when she came down. That was breakfast #1.

I arrived at work, knowing full well that we had a 9am breakfast meeting with bagels from Einstein Brothers, somehow conveniently forgetting I had eaten a quesadilla 45 minutes before. However, by 8:15am I was starving - stomach growling and everything. So, my friend Gail and I went to our newly renovated work cafeteria, and I had them make me an omelet. I only ate about 2/3 of it - I still remembered the breakfast meeting. That was breakfast #2.

We go up to our meeting, and I have half a sesame bagel with crushed almond cream cheese (seriously delicious - normally I go for savoury cream cheeses, but this was almost like icing). The bagel was so yummy and chewy - I seriously thought about having the second half, but then someone else snagged it. That was breakfast #3.

Lunch time rolls around a few hours later, and I can't figure out why I am unenthused. I have a salad with chicken on top, some steamed sesame peas, and an pumpkin muffin. I pick at most of it, and throw the rest away. It wasn't until about 3pm that afternoon that I remembered Andrew feeding me the quesadilla and was struck silly by the fact that I had managed to accidentally eat three breakfasts.