Beastly Hot (With A Side of Tomatoes) 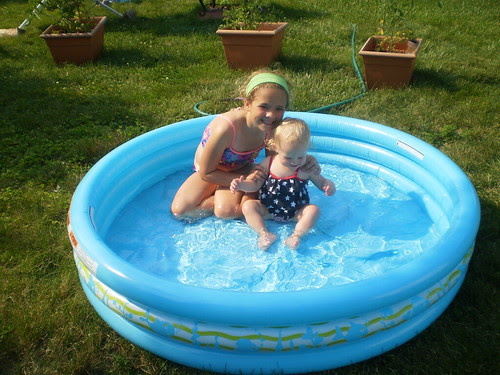 I bought a little wading pool for Willow and Piper, but only filled it with a few inches of water because I wasn't sure how Piper was going to take to it.

Apparently I had nothing to worry about! 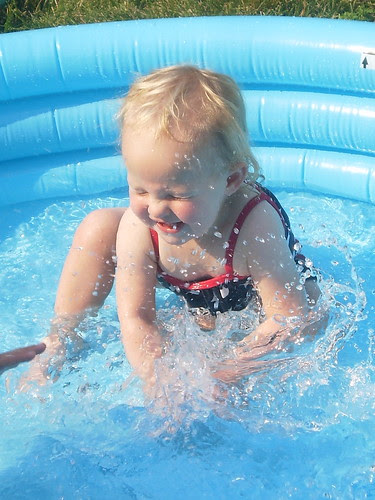 Willow and Piper playing - and you can see some of my tomatoes in background: 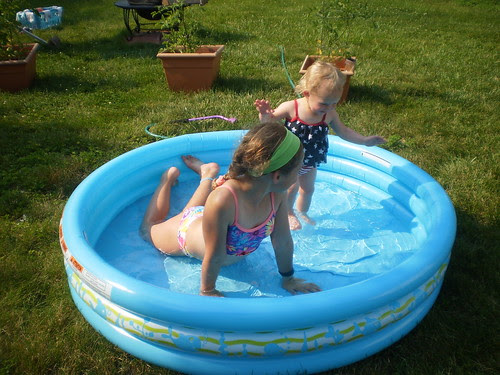 I have 7 tomato plants, all in containers. They are all supposed to be little tomatoes - grape, cherry, etc. Except for these ones - they came in a set that my mother-in-law bought me, but they are growing much larger than anticipated - about the size of large lemons: 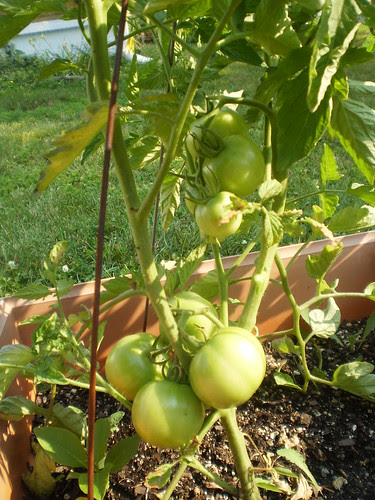 And here are some of my cherry tomatoes: 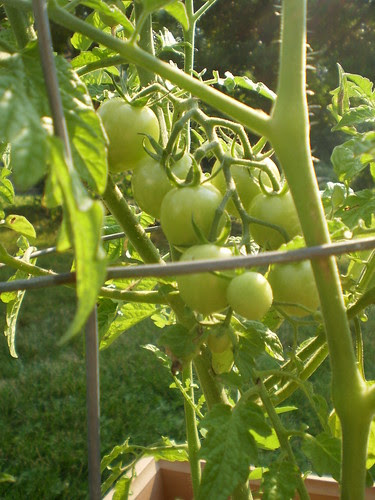 And my grape tomatoes (sorry for the blurry pic!): 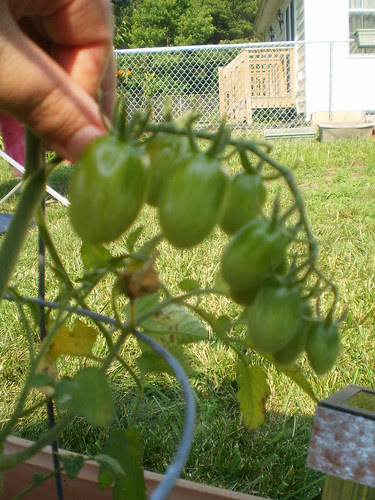 And some yellow cherry tomatoes: 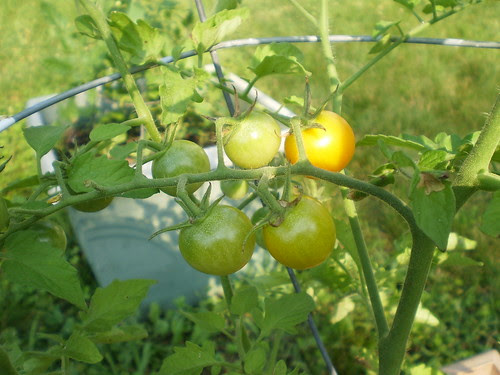 As much as I feel sticky and uncomfortable in this weather, the heat and sun have made my tomato plants go gangbusters, and I foresee many tomato-inundated meals this summer!
Posted by Jo at 8:41 PM 3 comments:

I went out to check on my tomato plants tonight - we had a windy night and morning, and I had noticed earlier that the tomato cages were a bit wobbly. Look what I found! 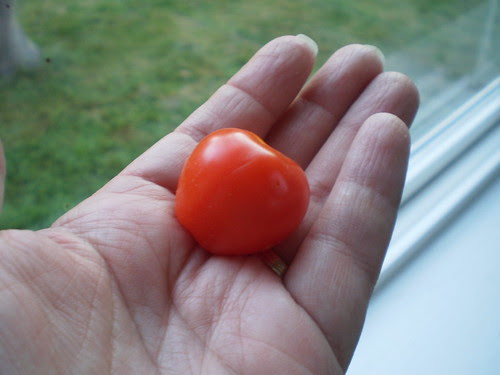 A ripe tomato! It's a type of small tomato (bigger than a cherry tomato) called a tomato berry. It's hard to tell from this picture, but it actually forms strawberry-shaped tomatoes.

Of course, it didn't last long. 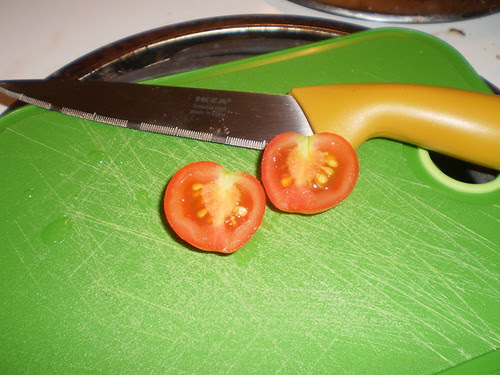 I sliced it in half and shared with Andrew, and it was so sweet. I can't wait for more tomatoes to ripen.
Posted by Jo at 7:37 PM No comments: 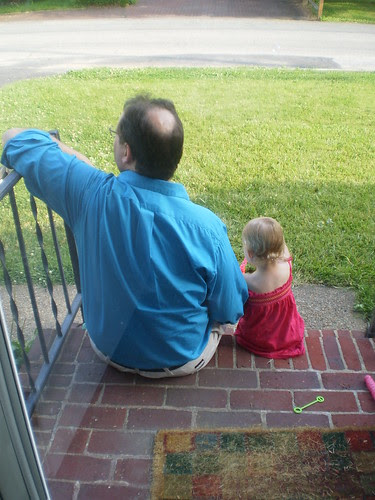 Blowing bubbles is one of Piper's favourite activities these days, and she is adamant that she can do it all by herself. It wasn't always that way - a few weeks ago, we would go outside and I would be the one doing all the bubble-blowing and she wanted to catch the bubbles. Then she wanted to hold the wand, but had no idea how to make bubbles... so it was still me doing all the heavy breathing. Then Piper figured she had to blow on the wand, but more often than not, the wand ended up in her mouth (yuck!) But a few days ago, she and I were outside and all of a sudden, I realized she was blowing her own bubbles. I can't believe how fast she is growing up.
Posted by Jo at 5:50 AM No comments:

This is probably the last time you will ever see this scene: 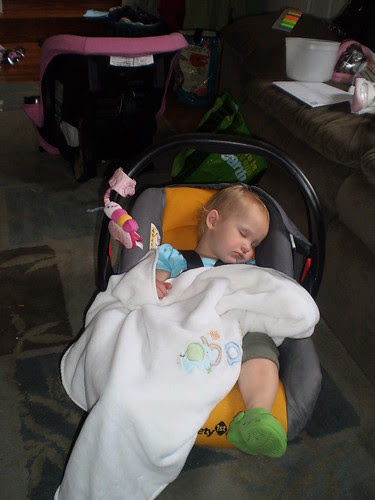 The infant bucket seat is about to be retired, and its successor, the snazzy pink number with the built-in cup holders, is right behind it. I will admit I will miss the ability to carry her into the house in the carrier when she would fall asleep, but she has definitely outgrown it.
Posted by Jo at 12:24 PM 1 comment:

I posted this video on Facebook a few days ago, but I think it is worth posting again.  We still haven't managed Piper graduating to eating independently without everything ending up in her hair.  Especially yogurt.  And spaghetti sauce.
Posted by Jo at 7:31 AM 2 comments:

Fieldtrip to the Mannings

Who says adults can't go on fieldtrips?! My friend, Michelle, bought a spinning wheel when we were at MDSW earlier in May, and she wanted to go to the Mannings for their Annual Spinning Seminar. Willow and I came along, and we had such a fun time (even if the GPS was trying to dump us off somewhere in Maryland!) When we arrived, one of the first things we saw was this huge teepee covered with afgans. Willow wanted to go inside, but the entrance was blocked. Wouldn't this be cool to have in your backyard as a playhouse? 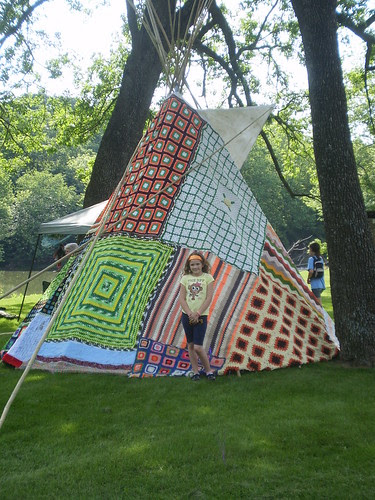 We also saw some Moorit sheep. I don't know much about sheep, but these ones seemed to be very docile, small creatures. 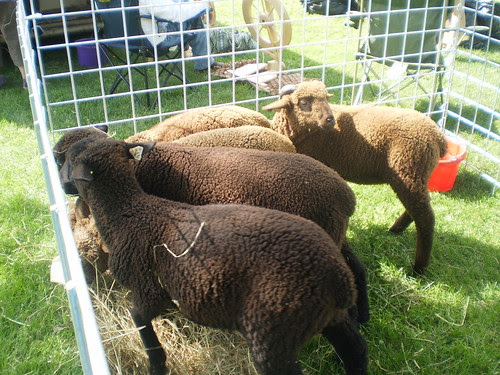 Angora bunnies! The one of the right was a 12 week old female, and the owner was having a contest for someone to name the bunny. All of her bunnies have names from children's books. Each person was allowed two suggestions - Willow suggested Alice (from Alice in Wonderland) and Jasmine (from Aladdin), I suggested Olivia (from the Olivia the Pig series), and Michelle suggested Jo (from Little Women). The winner wins 4oz of angora fiber! 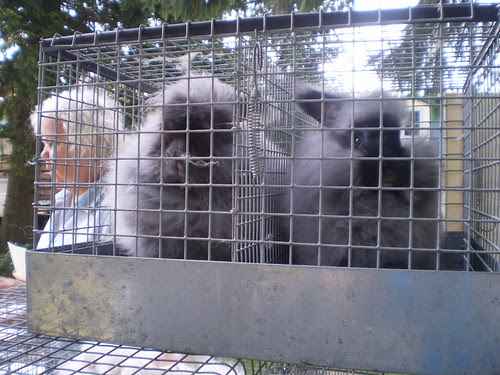 A little later in the afternoon the owner demonstrated how she clips the angora bunnies' fur - they are actually very compliant, just sitting on her lap as she trims them. 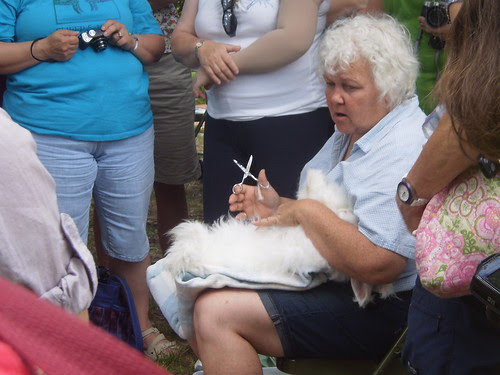 These next two pictures show Willow's favourite part of the day - the Cormo sheep (who is wearing a jacket to keep his fleece from getting dirty with nature matter): 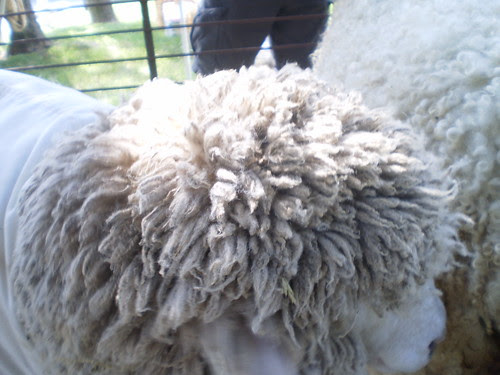 And the Border Leister Sheep shearing: 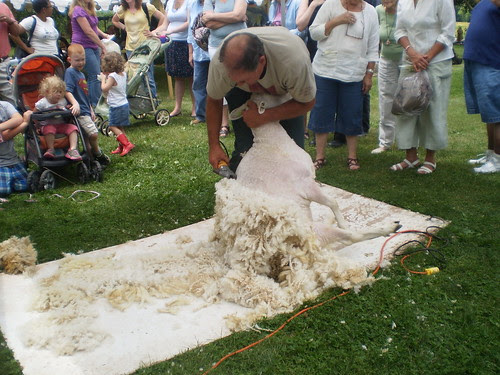 Again, I was quite taken how well-behaved these animals are when you trim them. Cutting my cat's claws takes two people, a towel to wrap the cat in, and the ability to clip at a land-speed record.

We also met Joan Ruane, who had come to the Mannings all the way from Arizona, and she demonstrated how easy it was to spin with cotton. She grows cotton in her garden and can pluck the blossoms right off the bushes and spin with it right off the blossom. When she was done, she says she likes to give cotton seeds to her students so the can plant it - and she gave me one, plied to the seed: 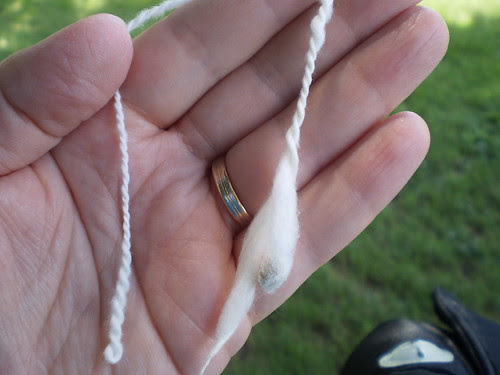 All of the above was outside - when I got into the shop, I was amazed to see what had to be the biggest yarn store I had ever been in. It encompassed 3-4 rooms, and that didn't even include the room with the spinning wheels you could try, or the room with the looms to weave on. I ended up with seven skeins of Cascade 220 Superwash in Cobalt Heather for my Ravelympics project: 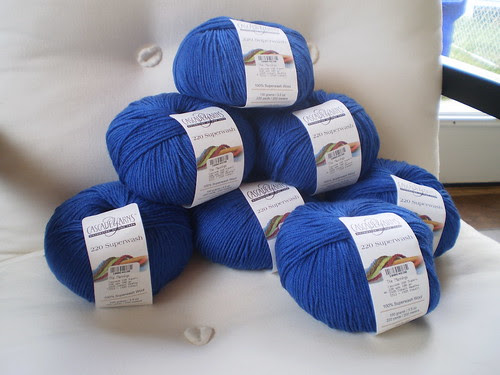 I am making the Paprika hooded vest for Willow as my Ravelympics project, but I bought enough yarn to make Piper one with the same yarn. I told you I was going to milk this dressing Willow and Piper alike as long as I could! The pattern is quite amazing - it has sizes 6 months through size 12/14. I am going to cast on for Piper's vest soon - I figure that way it will help to familiarize myself with the pattern before I am on the clock. I also bought a single skein of Mendocino in Red Rainbow to make a hat for Piper: 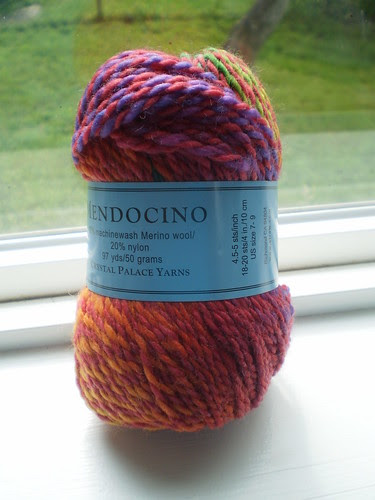 I love how it looks from the top of the skein: 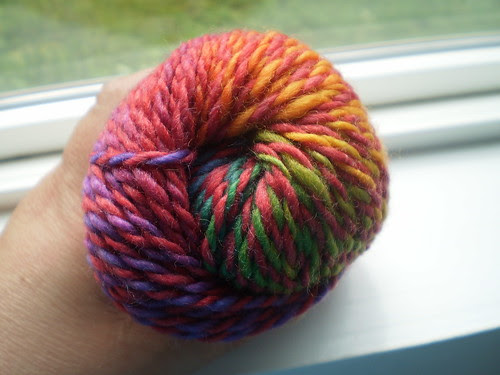 Willow, Michelle, and I had a wonderful time at the Mannings - I could gave spent oh-so-much-more money. At some point in the future, if I decide that I want a spinning wheel, I know absolutely where I am going for a test drive.
Posted by Jo at 6:23 PM 3 comments:

Blood Wyne by Yasmine Galenorn
My rating: 4 of 5 stars

I always seemed to dread this series coming around to Menolly's turn in the narrative because I find her the most difficult of the three sisters to connect with. I think this is partially because I don't like her characterization of her sisters. This book started off a bit slow for my liking, but the action soon picked up and there was even a pretty decent red herring in the story and some neat twists that will affect future books. I can't say I am all revved up for the next Menolly narrative, but I did enjoy this one more than her last turn in the cycle.

View all my reviews
Posted by Jo at 7:47 AM No comments: