Forgive the blog silence - I have misplaced my camera. I had it on Christmas morning, but then haven't seen it since. Willow graciously lent me her camera so I would be able to finish out the blog for the year.

The year ends with some finished objects - some of these were Christmas presents, others just stuff I managed to finished between baking and not cleaning my house.

I wanted to give Andrew a hand-made gift for Christmas, and I even bought the yarn to make him a hat way back at the beginning of November... but with everything else going on, I didn't manage to cast on for the hat until two days before Christmas. I made a valiant effort, but the hat didn't get finished until Boxing Day. 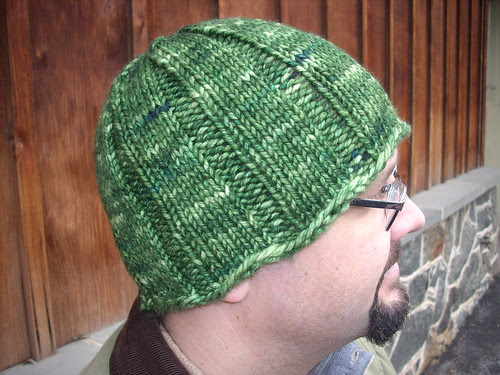 The Particulars:
Pattern: Ribbed Beanie by Wooly Wormhead
Yarn: Knottiegirl Superwash Bulky Merino in Spruce
Needles: Size 9 bamboo 16" circulars and dpns
Would I make this pattern again? Sure - it was easy enough. I'm not terribly keen on the rippling edge - I think if I had knit the cast on rather than doing long tail, it would have been firmer. I also changed the decreases - I didn't like how the decreases ate up the purl columns on the first decrease, so I decreased on the last two knit stitches and left the purls intact until I had a 2x2 rib. 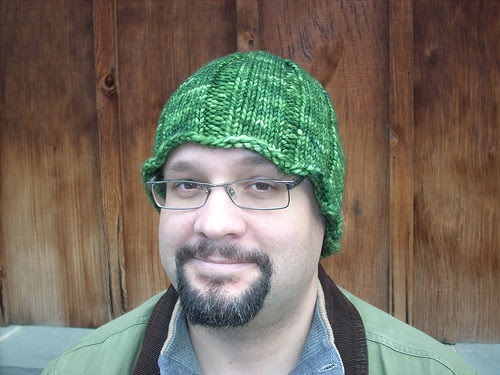 I also finished the first pair of socks of my own design - and as much as I like these socks, you can't see the lace pattern in the yarn. I might try knitting these up again in a solid or semi-solid and then I might publish it. These will be a gift for someone. 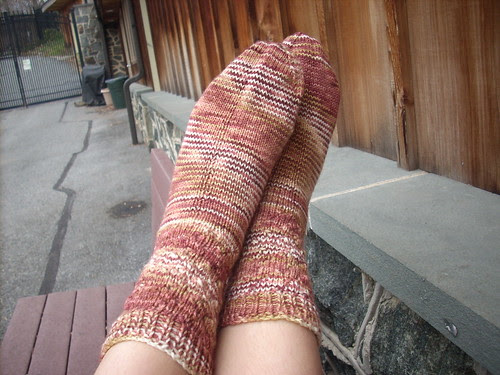 The Particulars:
Pattern: My own - unpublished.
Yarn: Unique Sheep Footprints in 'Chocolate Kiss.' I'm not sure where I got this yarn - it has been in my stash for a while.
Needles: Size 3 Harmony dpns. I rarely knit socks entirely on dpns, but my size 3 circulars were otherwise occupied.
Would I knit this pattern again? Yes - with some tweaks.

Incidentally - these are Willow's feet - at age 9 she has women's size 6 feet!

My second attempt at a cowl - I am still not sold on them for myself - this is the second one I have tried, and the second one that was meh on me. I like knitting them, however - round and round - makes lace easy. 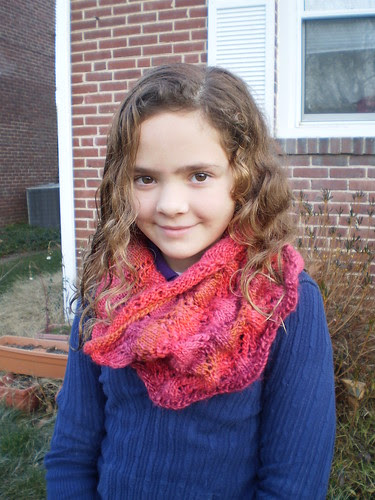 The Particulars:
Pattern: Diamond Leaf Cowl by Mosaic Yarn Studio
Yarn: Loops and Threads Sante Fe Roving in Scarlet Stripes (discontinued yarn) - acrylic
Needles: Size 7 Knitpicks 16" Circular
Would I make this pattern again: Yes, but definitely in a less bloomy/fuzzy yarn next time. I was a little short - the pattern called for 4 repeats, but I ended up with 3.5 and then had to start the purl rounds to cast off. I am not sure who this is for - it doesn't look fabulous on me. Right now Willow and Piper just play with it. Any takers?

I know it looks like Piper doesn't have any hair in most of the pictures I post on this blog: 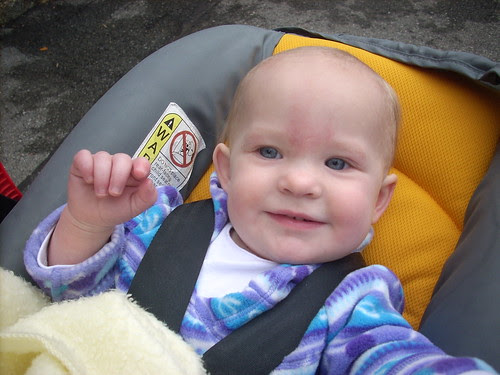 But I assure you, she does: 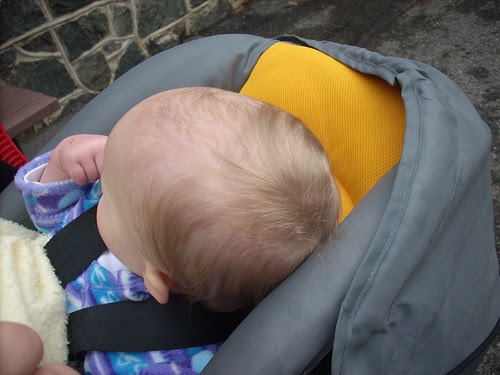 It all just resides at the back of her head. So far, her hair is stick straight - doesn't even curl when wet. This picture doesn't give a great idea of colour, but I think she may end up being a fair apricot/strawberry blonde when it finally comes in.

We were at the zoo today, and oddly enough, there was a melting ice sculpture in the middle of the picnic area: 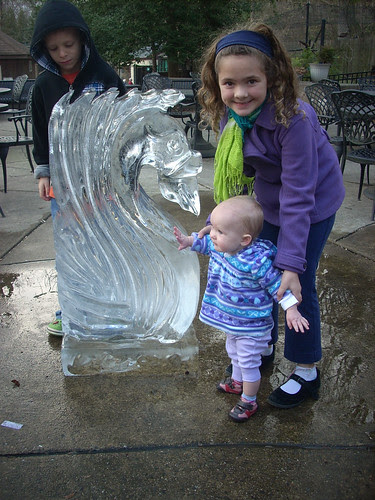 There must have been a function the night before at the zoo - and as warm as it was today - in the mid-50s, there was still a lot of definition and sharp lines on the statue.

Willow and Piper were putting on a performance of Cinderella - Willow, of course, was Cinderella (in her Pocahontas costume), and Piper was the Fairy Godbaby. Willow's dolls played the Evil Stepmother and Stepsisters. See how the cat has the best seat in the house from the playard? And I would like to say that I didn't 'drop' Piper. I was supposed to hold her until it was her scene... but the squirmy baby had other ideas.
Posted by Jo at 4:06 PM 1 comment:

Piper and The Ill-fated Bacon

I've managed to finish up a few small projects recently - but hadn't had a chance to take pictures of them (and some of them are intended as Christmas presents, so you won't see them until Christmas!) until today.

Here is Willow modeling my Simple Yet Effective Cowl: 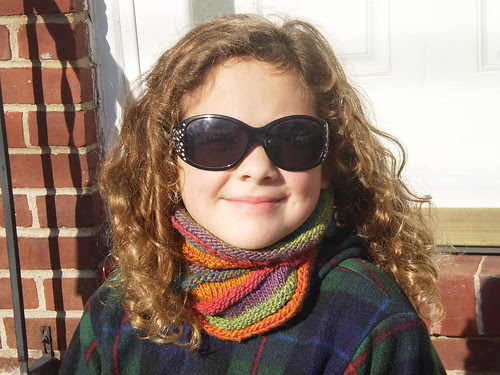 Which easily transforms into a ponytail hat: 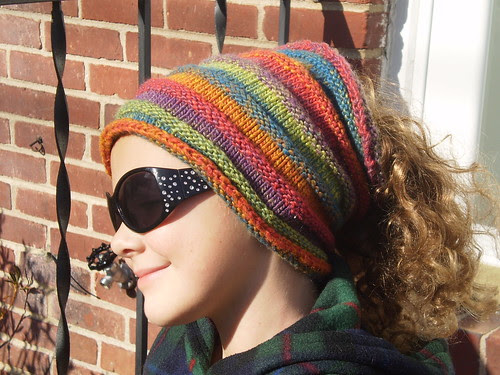 Pattern: Simple Yet Effective Cowl
Yarn: Lion Brand Amazing (lost tag with colour/lot number) - less than 1 skein
Needles: Size 5 bamboo circulars (16")
Would I knit this pattern again? Absolutely - it's very easy, and after the first few rounds I didn't even worry about toting around the pattern anymore. And while I am pleased with how the stripes worked up, I wouldn't use this yarn again for this project. The cowl itself is a little stiff (although it did benefit from a trip through the washer and dryer).

And can I say I love the top picture of Willow? We got around her natural squinty/eyes closed propensity with the sunglasses, but I have to say I am a little disconcerted at how grown up she looks. It is even more startling when I look at my Ravelry projects page and see the progression of Willow from about age 3 until now. Where has the time gone?
Posted by Jo at 1:56 PM 5 comments: