Random Things, None of Them Knitting

I finally managed to wrest the camera from my husband's clutches, so without further ado, here is the mystery pink snowball bush that is on the front side of my house. It's very pretty, and as far as I can tell, doesn't smell. Does anyone know what it is? 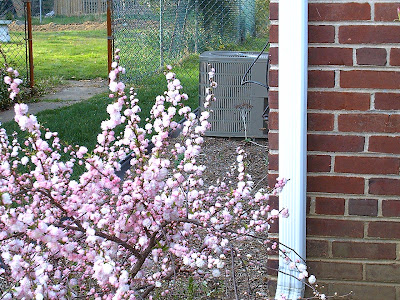 We have two large azalea bushes in front of the house on either side of the front door and they have started to bloom as well. I have to say I am a bit disappointed - compared to some of the beauties in my father-in-law's garden, the colour of these bushes is rather blah. 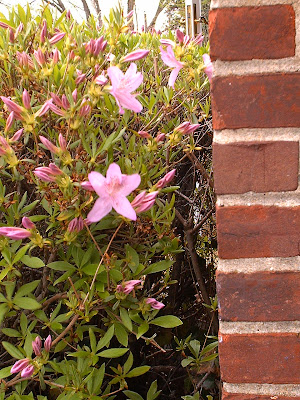 And, as promised, a picture of our carpet in sunlight - I took this picture without flash and the colour turned out much truer. The lighter taupe colour is almost an exact match of our sofa - and when we get around to painting the walls, I want them to be a lighter aqua colour than in the carpet. 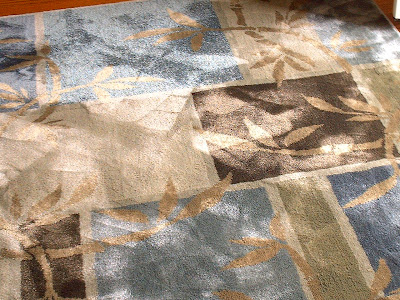 And, because many of my friends have requested... here is a picture of Willow on her brand new big girl bicycle. Um, she dressed herself. That is all I am going to say. On second thought - that isn't so bad. She originally had mauve pants on with the orange sweatshirt (and green socks). We went for a ride (well - her riding, me spotting) around the block and she only managed to fall off the bike once. I kept telling her that she needed to be able to control the bike - whenever we were going down a shallow decline, she was letting herself coast and go fast. This is all very well and good if you know what you are doing... but she doesn't. 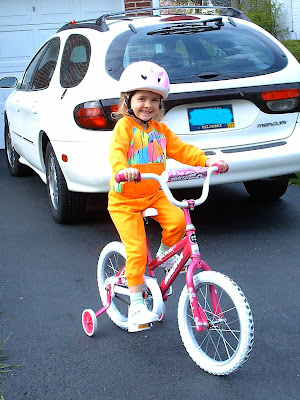 And finally, I wanted to say a big "BOO" (no, not the scary boo - rather, the "you dumbass you" boo) to the people in the local school district who voted against the initiative for full day Kindergarten and other school improvements. People didn't see the educational improvements - all they saw was the property tax increase of $50 per house. Because of this, we have to pay $3500+ for optional full-day Kindergarten in a BLOODY PUBLIC SCHOOL for Willow next year. Don't get me wrong - I am not begrudging my daughter her education in the slightest - I just feel it is ridiculous that in this day and age when in so many families both parents *have* to work to make ends meet that full-day Kindergarten is still considered 'optional.' How much is it needed now? When I was enrolling Willow, the woman who was helping people fill out the paperwork mentioned that her daugher had been 80th on the waitlist the prior year. This particular school had plans for one full-day class of 20 students and there were 80+ kids on the waitlist. And yes, our state is slated to have mandatory government funded full-day Kindergarten... the year after Willow needs it.
Posted by Jo at 4:43 PM

The top picture is a flowering almond.
http://davesgarden.com/pf/go/65085/index.html
I had one at the house I grew up in.

Thank you so much! I followed your link and saw lots of pictures. Thank you for identifying the bush for me :)

Oh, cool, flowering Almond! That is pretty! Willow looks cute on that bike. Yeah, they scare you a bit when they first learn! About the kindergarten, geesh, that is a big bummer!!

As for the socks http://nownormaknits2.typepad.com/magic_28/ and click on the pattern! Go for it! As for the xray film, some places still use it, a lot of people have gone to digital images. bye! :)

Beautiful bushes. That's terrible that you have to pay for full day kindergarten at a public school!

Aw now she was just thinking safety! Everyone in a car will see her riding her bike wearing that outfit!

I feel your pain. Chunky won't be going to full day kindergarden next year, but I can tell you I'll easily spend $3500 in before/after school care regardless. And sadly that will be WAY less than what we pay for daycare now. How sad.

the flowers are lovely thanks for sharing! and that rug is fantastic!

Orange is the new pink, Joey!

And the Flowering Almond is gorgeous (and yes, you do need a new camera).

Full-day kindergarten is ridiculously expensive here too. It really is sad.

I want a Flowering Almond now.