24 Hours of Baseball and some WiPs

Whew! It's been a whirlwind of baseball around here!

Yesterday, Andrew, Willow, and I headed out to Frawley Stadium to see the Wilmington Blue Rocks play baseball. 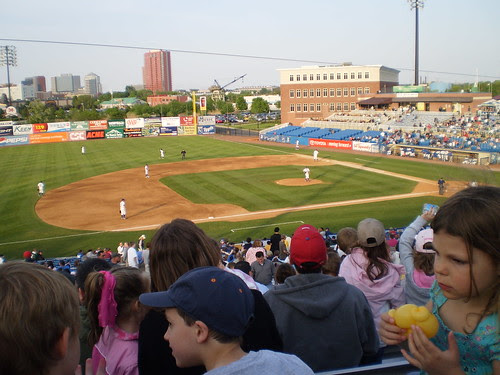 This was Willow's first trip to a baseball game of any kind, and she thoroughly enjoyed herself. She saw a homerun, bases being stolen, and foul balls coming perilously close to us in the general admission seats. She got to eat a hot dog, have roasted peanuts and cracker jacks. I think it is safe to say that a baseball fan has been born. 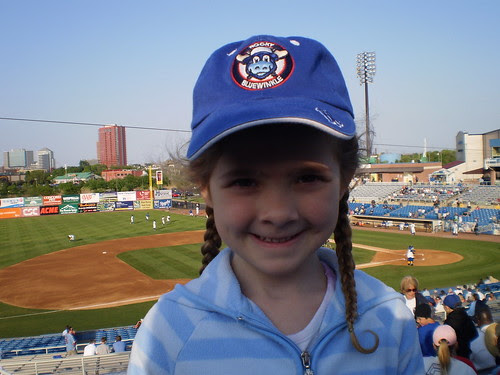 I think she especially liked the theatricality (is that a word? If not, it is now!) of it all. The celery that came out and danced whenever a run was scored, the games between innings, people singing, the scoreboard lighting up and shooting water from the Mountain Dew bottle. Now I will just have to teach her how to play!

There was a fire up on the hill in Wilmington around the second inning mark: 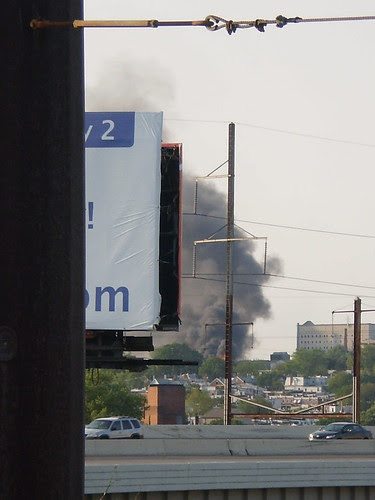 For a while, people were more interested in watching the fire than the game in front of us. I can't say I blame them - I've never seen so many attempts to bunt in my life!

The baseball calvacade continued today when my work group had our yearly outing to a Phillies game. I *love* watching baseball in person - I played softball and fastball for so many years it just doesn't make sense to me when I watch it on TV - the perspective is all wrong. 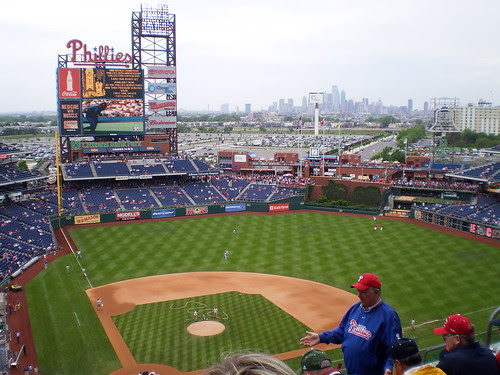 Is Citizens Bank Park a lovely stadium? Our seats were in section 418 - I've never been up that high before. It wasn't bad - I mean, we were looking down the entire time, but we had a great view. Last year we were about 15 feet past third base and my view was obscured by the yellow foul line pole - I couldn't see the scoreboard at all. Personally, I much prefer being somewhere along the first base line.

There was an interesting starting act. I was really off in Lala-land. I had eaten my lunch, was wondering if it was going to rain or not when I looked down at the field and saw dogs... lots of dogs: 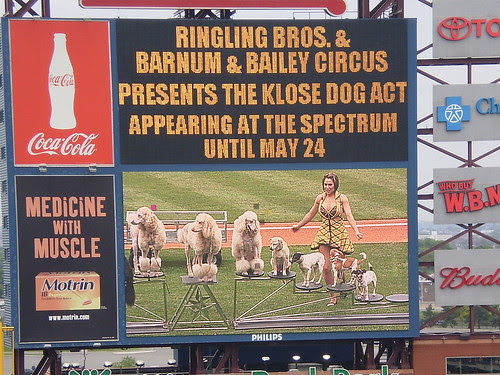 And a very chesty assistant. Ahem. The dogs did all sorts of cute an acrobatic tricks - it's too bad Willow wasn't there - she would have really enjoyed it.

The game was fun - it went into a tenth inning, but the Phillies ended up losing to the Dodgers 5-3. It was amusing to listen to my guy work friends - apparently they have an extensive fantasy league, so nearly every move on the field was mirroring something in their fantasy league. And they think knitting is time-consuming!

I did bring my knitting with me, and neither the security guard nor the cashier where I bought my food were surprised by it. The cashier asked me if I was working on a hat and I had to pull out my project to show her the sock in progress. I didn't knit at the park - my sole reason (ha-ha! pun intended!) for bringing it was the ride home. We have done this businessperson special a few times and I know we always get stuck in traffic on the way home.

So, without further ado, here are my two socks in progress. Both are second socks, and both will hopefully be finished by the weekend: 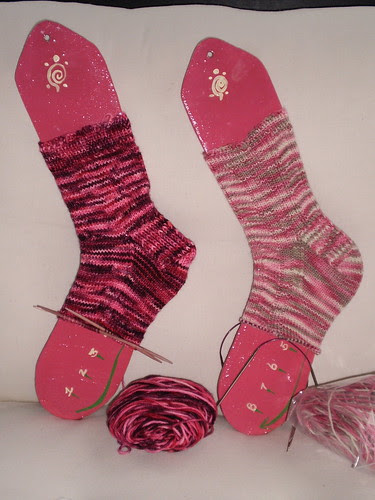 The pink sock on the left is the matching Mandy sock, and I need to find someone with feet larger than mine to give it to. I have 6.5/7 wide feet and they were just too long for me. And I am too lazy to rip them back and make them shorter. The pair on the right I am still up in the air on - I really like them and the pattern, but I think I may have a recipient in mind for those ones as well. 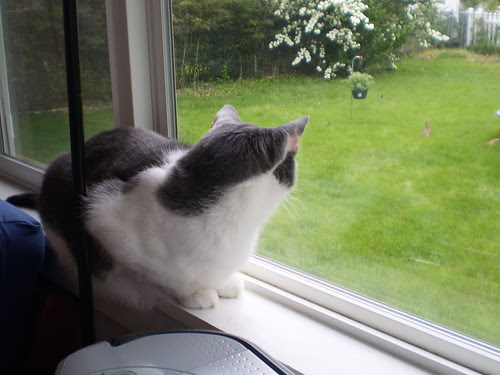 So Chunky too has discovered baseball. He's been watching the Mets at night after dinner and each night he has I've had to wake him up off the couch to get ready for bed (normally I never have to do this). He made the comment the other night that he doesn't understand why he keeps falling asleep when baseball is on.

Nice minor league park there! I stand by my assertion that the A and AAA leagues are more fun than the bigs. The guys still really want to play.

I used to be a Phillies fan back in the day… used to have a crush on Mike Schmidt… who has aged rather well….

I have bigger feet than you. Just sayin.
I remember watching you pitch once in high school.

Is that a bunny I see? We have one in our front yard and the kitties just love watching it hop around.

Knitting and baseball is the perfect combination!