... but the kid just wouldn't cooperate. We went to the 'Boo at the Zoo' party at the Wilmington Zoo and I hoped to get some great pics of her, but she just wasn't interested in getting her picture taken. 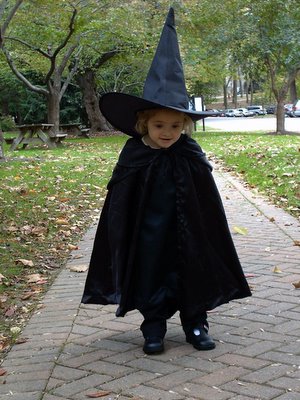 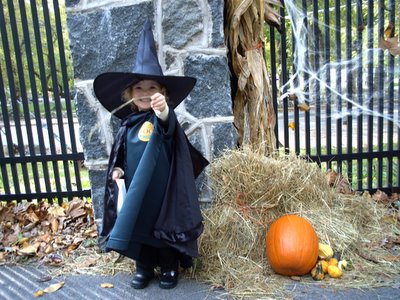 We only hit about 15 houses last night - after that Willow said she was tired and we ended up pulling her home in her red wagon. I was a bit peeved, though - we went to three houses in a row that had all lights on (and one even had decorations out front) and when we rang the doorbell, they said they didn't have candy to give out. WTF?!?! I always understood that if you were choosing to not give out candy, you turned your front lights off or put a note out front so people didn't come to your door. It was hard trying to explain to a three year old why these people didn't have anything for her. The funniest costume I saw? A 10 year old boy wearing a pink bunny costume... with a Darth Vader costume on top of that!
Posted by Jo at 4:54 PM

Your daughter is so adorable in her costume! Hmmm, and I thought only toddlers had the propensity for wearing two costumes tandem like the 10 year old you saw. I guess we've got a lot of interesting years ahead of us! :-)

Well, if Willow would have had her way, she would have been a super hero witch. I tried in vain to find Superman or Spiderman underoos around here for her to wear with her costume. I did find them online, but didn't think they would get here in time.

Great pictures Jo! Willow is so adorable in her witch costume!!