I Think I Owe My Mom An Apology 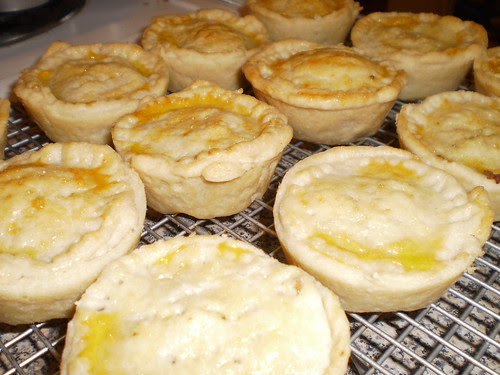 I had no earthly clue how time-consuming meat pies and cheese pies were to make. When I think about all the pies I have gobbled down in my 38 years, absolutely oblivious to the effort that goes into them... well, let's just say I feel very, very guilty.

And the crazy thing is I only made a dozen meat pies and a dozen cheese pies - and I am freaking exhausted! Yes, some of that has to do with the pregnancy, but there is a lot of mixing, bending over, and rolling out involved. I can't imagine making enough of these for a family of five plus extended family members like my Mom does. They aren't the prettiest pies, but as my friend Kelly says, they don't have to be pretty - they just have to be edible.

Andrew is going to have a fit when he sees how many dishes I dirtied in the preparation of the pies... hopefully he can be placated by their meat and cheesy goodness...
Posted by Jo at 7:24 PM

Oh..drooling now! Seriously, you are amazing getting these done being pregnant and I'm sure quite tired all the time. Have a Merry Christmas!

nope you don't!!! I got all the thanks I needed just by seeing everybody enjoying the baking.
Love & Hugs

Those look very yummy! Pies take an amazing amount of time, don't they? The crust alone is tons of work.

All mess is easily mitigated by the enjoyment of the gobbling.