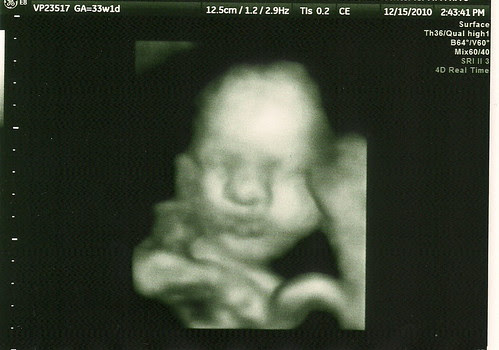 Sorry for the tardiness - I was trying to wrap up some presents last night that will have to get sent out express mail because I hadn't realized it there were only 10 days left until Christmas. HOW IN BLOODY HELL DID THAT HAPPEN?

Yesterday was full of appointments - OB in the morning, perinatologist in the afternoon. Found out Sprog is still head down, heartrate of 146, and I had lost 3.5 pounds from my last appointment. They seemed surprised by the weight loss, but I wasn't - my previous appointment was in the late afternoon after a big lunch, and the nurse snagged me before I would whip off my winter sweater. At that appointment the nurse chastised me about gaining 5 pounds in 2 weeks, and all I could think was, "No freakin' way did I gain 5 pounds in 2 weeks..." A pound and a half over 3 weeks is much more reasonable.

At the ultrasound in the afternoon the tech told me that Sprog already has a headful of hair - they could see it standing up like a halo on the ultrasound screen (Ah well - Willow started out that way as well - dark and long - but it all fell out when she was 9 months old and grew in blonde and curly). And the nose isn't flat like in the picture - that's a distortion because of how the machine sees contours - this one might actually have my ski jump nose according to the profile shots.

Yikes on having to express mail! I have to priority, hopefully on Saturday if I can get my butt in gear.

Sprog looks like she's got her arms folded across her chest (not sure those are arms but they look like it ;)